This marks the 46th meeting between these programs, with Alabama holding a four-game winning streak over the Lady Vols and taking the past two games in Tuscaloosa. In addition to attempting to halt that series streak, the Lady Vols will be seeking to end a three-game losing skid that began on January 6th. UT has lost its last three contests to Missouri (66-64), Kentucky (73-71) and Georgia (66-62) by a combined total of eight points. 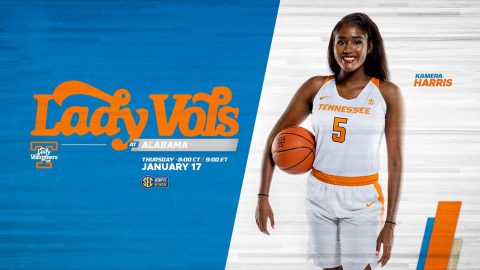 Tennessee Women’s Basketball travelst to Alabama to take on the Crimson Tide this Thursday at 8:02pm CT. (UT Athletics)

The Crimson Tide enters Thursday night’s match-up with a losing streak of its own, dropping its last three contests and four of its past five.

One of those losses, though, was a three-point setback on the road at (then) No. 23 South Carolina, 62-59, illustrating the ability of the Tide to play well against ranked opponents.

Alabama is struggling to score in SEC play, averaging 58.0 ppg., including 43 in its loss at Texas A&M on Sunday.

After scoring 80+ in its last five non-conference games, Tennessee tallied 78 on the road vs. Auburn before failing to score more than 71 the past three outings, including 64 vs. Missouri and a season-low 62 at Georgia.

Pam Ward (play-by-play) and Carolyn Peck (analyst) will describe the action for the SEC Network.

The Lady Vols hold a 49-6 all-time record vs. Alabama, dating back to January 22nd, 1977, but the Crimson Tide is riding a four-game win streak in the series with Tennessee.

UT failed to reach 65 points in any of those losses and didn’t hit 58 in either of the two recent games in Tuscaloosa.

Against the Tide, the Lady Vols are 18-2 in Tuscaloosa, 22-1 in games played in Knoxville and 9-3 at neutral sites, with UA taking the last two match-ups on its courts.

There has never been an overtime game in the series.

Alabama director of operations Brian Johnson is a 2016 Tennessee graduate who served as a manager on Holly Warlick [3]‘s staff for four seasons.

Threes Are Key
UT went six  straight games where it hit at least seven three-point shots. The past three games, all losses, the Lady Vols have hit no more than four treys in a contest.

Let’s Grab 50
Tennessee has pulled down 50 or more rebounds in six contests this season, including the past two: 50 vs. Kentucky and 54 vs. Georgia.

Evina Goes For 20 Again
Evina Westbrook [6] has scored 20 or more points in half (8) of Tennessee’s games thus far, including 20 and 23 in her past two contests.

New Go-To-Players
UT’s go-to players are all in new roles and learning to adjust to defenses geared to inhibit them. Two sophomores lead the team in scoring (Westbrook, Davis) and freshmen (Green, Collins) are the fourth and sixth-highest scorers on the team thus far. Bodes well for the future.

Sophomore point guard Evina Westbrook [6] poured in 10 points in the fourth quarter, but it wasn’t enough to overcome a third-quarter UT shooting slump and Georgia’s second-half rally in a 66-62 Lady Vols setback at Stegeman Coliseum in Athens.

There were five ties and 10 lead changes in a contest of huge momentum swings.

Westbrook led Tennessee (12-4, 1-3 SEC) in scoring with a game-high 23 points, logging her eighth 20+ point performance of the season. Rennia Davis [7] had six points and 12 rebounds, while Cheridene also added six points and 10 rebounds.

The Crimson Tide returned two starters and seven letterwinners from a year ago, including point guard Jordan Lewis and guard Shaquera Wade.

Jasmine Walker, a 6-3 junior forward and 5-10 junior guard have picked up the scoring slack, averaging 13.9 and 13.5 points, respectively, for Bama.

The Tide won two games in the WNIT before falling at Virginia Tech, 74-67.

Texas A&M jumped out to a 15-6 first quarter lead and never looked back. The Aggies held a 31-17 advantage at the halftime break and continued to lead in double figures the rest of the way.

Tennessee had three players in double figures. Nared led the Lady Vols with 22 points, Rennia Davis [7] scored 18, and Mercedes Russell [10] added another 11. Both Davis and Russell notched double-doubles, with 10 and 11 rebounds, respectively.

The Crimson Tide’s offense was paced by Jordan Lewis with 19 points and Ashley Williams with 16.

Last Time They Played In Tuscaloosa

Schaquilla Nunn recorded her first double-double of the season, but it wasn’t enough as Tennessee fell short against Alabama, 65-57, at Coleman Coliseum on February 16th, 2017.

UT struggled with leading scorer Diamond DeShields knocked out by a first-quarter injury and Jaime Nared [9] in early foul trouble.

The Tennessee Lady Vols returns home for a Monday night “We Back Pat” contest at Thompson-Boling Arena vs. Arkansas. Tip is set for 6:02pm CT on the SEC Network.