Clarksville, TN – To the road they go again as Austin Peay State University (APSU) men’s basketball team resumes its four-game trek through the western half of the league beginning with a 7:30pm, Thursday contest at SIU Edwardsville. 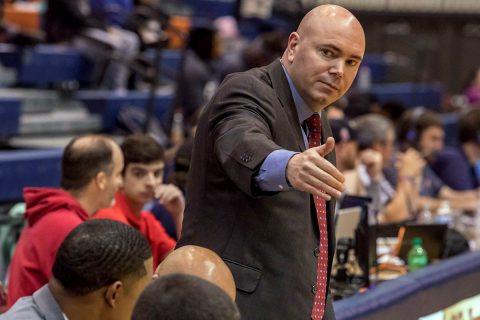 The Govs have won three straight in the Vadalabene Center and seven in a row overall against SIU Edwardsville, but the matchups have historically been close—the last five contests between the Govs and Cougars in Edwardsville have been decided by five points or less, with the 2017 contest needing overtime before a decision could be reached.

Austin Peay brings reigning Ohio Valley Conference Newcomer of the Week Jabari McGhee [1] into this contest playing at the highest level he’s attained thus far as a Gov. Since the Purdue Fort Wayne game, McGhee is averaging 10.6 points and 6.8 rebounds and hitting 67.3 percent (33-of-49) from the floor, including his second double-double in four OVC contests with 14 points and 10 boards in his last outing at UT Martin.

The Govs are among the league’s best shooting, scoring, offensive-rebounding and three-defending teams.

Four Cougars, led by David McFarland at 14.4 ppg, are averaging double-digits heading into this contest, but they are largely going it alone in the scoring column. McFarland, Tyresse Williford (13.3 ppg), Brandon Jackson (12.6) and Cameron Williams (10.9) account for nearly 56 percent of SIU Edwardsville’s scoring; the Cougars cannot afford to have any of that quartet faced with an off-night from the floor.

The Govs were on their way to an OVC Tournament semifinal appearance and SIU Edwardsville was slated to miss the tournament, but the Cougars pushed Austin Peay to the very limit in an 86-82 contest at the Vadalabene Center, February 22nd, 2018.

The Govs were lights-out from the floor in the second half to erase a halftime deficit, hitting 17-of-27 from the floor thanks to huge efforts from Chris Porter-Bunton [2], who equaled his career high with 23 points, and Zach Glotta [3], who scored 14 of his 19 points in the second half–his go-ahead three with 2:08 to play put the Govs ahead for good.

A win would be Austin Peay’s eighth straight win against SIUE, their longest active streak against an OVC opponent and longest against any league foe since an 11-game streak against Jacksonville State (January 4th, 2007-January 14th, 2012).

Four Governors–Jabari McGhee [1], Terry Taylor [5], Chris Porter-Bunton [2] and Dayton Gumm [6]–rank among the top-15 in the OVC in field goal percentage; no other team has more than three players on the list, with Brandon Jackson the only SIU Edwardsville representative.

Over the last nine games, the Govs are shooting 51.9 percent (286-of-551) from the floor; they’ve won eight of those contests. Just twice during that stretch have the Govs been below 50 percent, with a low of 40.7 percent at Arkansas. The Govs’ 14-game streak of shooting at least 40 percent from the floor is Austin Peay’s longest since a 16-game streak to close the 2016 season (January 21st-March 17th).

A win would be Austin Peay’s fifth straight road win in league play, its longest streak since a five-game streak which spanned the end of the 2009-10 season and the start of the 2010-11 league campaign.

Porter-Bunton could become Austin Peay’s all-time leader in games played, but he will need a little help. With 14 games to play in the regular season, Porter-Bunton stands at 115; if he plays in all 14, that will get him to sixth at 129 and he’ll then need five postseason contests (OVC Tournament plus a postseason berth) to equal or pass Caleb Brown’s 134 games from 2007-11.

Check back at LetsGoPeay.com and on Austin Peay’s Official Athletics Facebook page often for up-to-date news about all Governor athletics, as well as the Governor men’s basketball Twitter page (@AustinPeayMBB). Live stats will be available during the game at siuecougars.com, and all home games and Ohio Valley Conference games can be viewed on the ESPN+ app.

Postgame video interviews and other videos from around APSU Athletics can be found on our YouTube page (www.youtube.com/letsgopeay). [7]