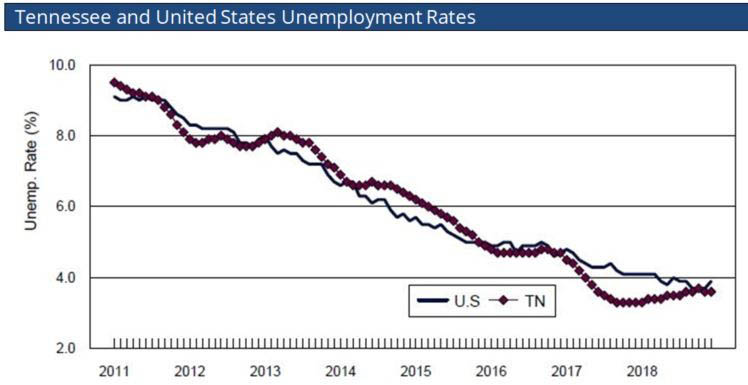 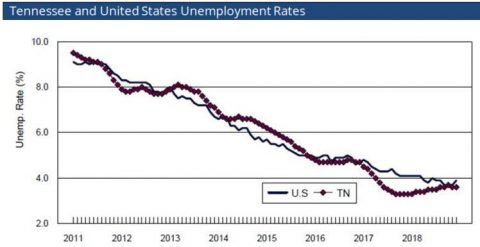 The seasonally adjusted statewide unemployment rate for December 2018 was 3.6 percent, which mirrored the rate from the previous month.

“Tennessee’s unemployment rate has remained near historic low levels for a year and a half,” Haslam said. “This is a true testament to the hard work of everyone across state government over the last eight years to create a business environment that gives employers the opportunity to expand and our citizens of the resources they needed to be the most prepared workforce in the nation.”

While the unemployment rate remained steady, there were fewer available positions for job seekers. Total nonfarm employment decreased by 5,800 in December. The trade/transportation/utilities sector experienced the biggest decline with a loss of 2,800 jobs. Mining/logging/construction is the only sector that saw growth, adding 100 new jobs statewide.

Even with the decline in jobs during the last month of 2018, year-to-year statistics showed Tennessee employers created 59,100 new positions across the state.

“It’s really something to see Tennessee employers add that many jobs in just one year’s time,” said Phillips. “The number of new jobs clearly shows Tennessee is one of the top states in the nation for business growth and development.”

The statewide and national unemployment rates are seasonally adjusted to eliminate the influences of weather, holidays, the opening and closing of schools, and other recurring seasonal events from an economic time series.

A complete analysis of Tennessee’s unemployment data for December 2018 can be found here.