Knoxville, TN – UT’s second “We Back Pat” branded game of the week occurs on Thursday night, January 24th as the Tennessee Lady Vols (12-6, 1-5 SEC) steps outside of SEC play to welcome No. 1/1 Notre Dame (18-1, 6-0 ACC) to Thompson-Boling Arena for a nationally-televised contest. Tip-off is slated for 6:02pm CT, with the game being carried by ESPN, the Lady Vol Radio Network and SiriusXM Satellite Radio.

Thursday’s match-up represents the second contest in a grueling three-game week for the Lady Vols.  LSU, which is idle Thursday night, comes to Knoxville on Sunday for the annual “Live Pink, Bleed Orange” breast cancer awareness game at 1:00pm. Interestingly enough, Arkansas also had seven days to prepare for the Lady Vols, meaning both SEC foes this week had extra prep days prior to playing UT. 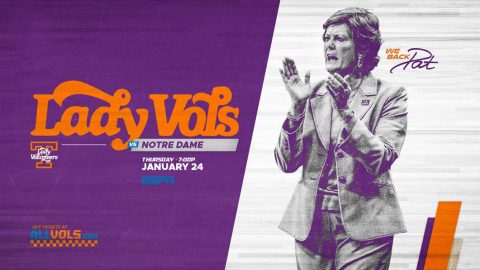 Notre Dame, meanwhile, comes to Rocky Top on an 11-game win streak and remains perfect in ACC play. The defending NCAA champion Fighting Irish suffered the team’s only loss of the season on December 2nd, as UConn went to Purcell Pavilion and handed Muffet McGraw’s squad an 89-71 setback. The Irish squad has been on a tear since then, however, with its closest game being a 14-point victory (82-68) over current No. 4 team Louisville on January 10th.

Thursday’s match-up provides a similar scenario to the last time these teams met in Knoxville. On January 16th, 2017, an unranked Lady Vols squad toppled No. 6/6 Notre Dame, 71-69, on a jumper by Jaime Nared [1] with just over 10 seconds remaining.

Mickey Dearstone is handling the call for IMG College/Lady Vol Network radio/online broadcasts for the 20th season. A link to the live audio stream can be found on each game’s Hoops Central page or the Lady Vol schedule on UTSports.com [2].

“We Back Pat” Week

Orange and purple shakers, courtesy of the Pat Summitt Foundation, will again be available Thursday night for fans to pick up from the Fan HQ table at Section 129 while supplies last.

There will be a “We Back Pat” coloring contest.  Present your coloring sheet at the gate to receive free admission & bring to the Fan HQ table at section 129 to be entered. Must be 12 & younger to enter. Entrants must download (PDF) [6] their coloring sheet from UTSports.com.

Help us Spark the Summitt during Introductions at the game! Download our new free light-up app, courtesy of Coca-Cola. Once downloaded, simply open your Hoops Hype app when the lights go out, and let your phone do the rest.

Stay in your seat for a halftime performance by the world famous acrobat, Red Panda.

Muffet McGraw started her career 0-20 vs. Tennessee, but is 7-1 since then and has developed the Irish into a national power.

The Fighting Irish had claimed the last six encounters between these programs until UT pulled off the upset of the nation’s No. 6/6 team, 71-69, two years ago in Knoxville.

UT came out on fire last season in South Bend and looked on its way to a two-game series streak of its own. The Irish, however, rallied from 23-down in the second quarter to defeat the Lady Vols, 84-70.

The Tennessee Lady Vols are 9-2 all-time in Knoxville, 8-4 at Notre Dame and 4-1 at neutral sites vs. the Irish. The teams have never played an overtime game.

The series has returned to a typical home and home rotation) after Notre Dame played back-to-back games at Thompson-Boling Arena in 2013 and 2014, and UT visited Notre Dame in 2015 and 2016.

Holly Warlick [9] is seeking her second win vs. Notre Dame as head coach in her seventh game vs. the Irish.

UT’s Angie Bjorklund knocked down seven threes at Notre Dame on January 5th, 2008, tying a (then) school-record (now tied for fourth) for most treys by a Lady Vol in a single game.

Zaay Stepping Up
Freshman guard Zaay Green [11] has really stepped up her scoring game in SEC play, ranking as UT’s second-leading scorer at 11.3 points per contest. She is shooting .446 from the field and averaging 5.7 rebounds, which is third on the team.

London Calling
Cheridene “London” Green is shooting 50 percent from the field and is averaging 9.0 points and 9.3 rebounds for the Lady Vols in the past six games. The senior forward is fourth for UT in scoring and first in rebounding.

Despite an 18-point second-half performance from sophomore point guard Evina Westbrook [10], the No. RV/17 Tennessee Lady Vols fell to Arkansas, 80-79, at Thompson-Boling Arena on Monday night. Westbrook’s game-winning 3-point attempt came up short, as the Lady Vols fell in their first of two home “We Back Pat” games this week.

The Razorbacks had three players with at least 10 points, as senior guard Malica Monk led Arkansas with 23 points. Chelsea Dungee (19 points) and Alexis Tolefree (16 points) were the other Razorbacks with double-digit points. Arkansas logged 12 3-pointers and 20 points off turnovers in the win.

Arike Ogunbowale had a strong offensive performance for Notre Dame, leading the way with 27 points, while Marina Mabrey added 20 points.

Jaime Nared [1] drained the winning jumper with 10.3 seconds remaining, Diamond DeShields scored 20 points and Tennessee clawed its way back to seize a 71-69 upset win over No. 6/6 Notre Dame on January 16th, 2017, at Thompson-Boling Arena.

After trailing most of the game, the Lady Vols (11-6) flipped the script in an exciting fourth quarter.

With under five minutes remaining, Schaquilla Nunn made back-to-back put-backs and UT trailed just 65-64. Mercedes Russell [17] made two clutch free throws with 2:32 to go to keep it a one-score game and Meme Jackson [14] buried a corner 3-pointer 1:22 left to put the Lady Vols up 69-67.

Notre Dame’s Lindsay Allen quickly answered with a jumper to tie the game at 69-69. On UT’s next possession, Nared connected from 15 feet to put Tennessee up for good, 71-69.