The transfer of authority was part of the regular rotation of forces that support the Combined Joint Task Force – Operation Inherent Resolve. 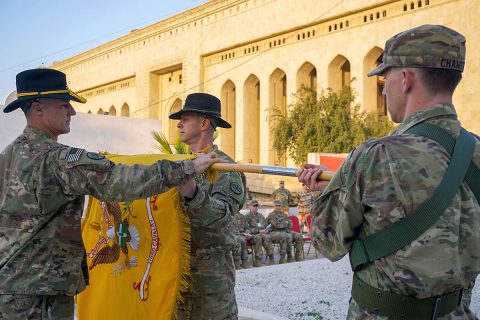 Brave Rifles deployed from Fort Hood in April to locations across the CJTF-OIR area of operations to support the ongoing fight to accelerate the lasting defeat of ISIS.

“Thank you to our Iraqi partners for the honor to fight ISIS alongside you,” said Col. Jonathan Byrom, 3rd Cav. Regt. commander. “It is our privilege to hand over responsibility to our brothers and sisters from Bastogne.”

The Bastogne soldiers will work alongside coalition partners from 74 nations and 5 international organizations to support the Iraqi Security Forces as they continue the fight to defeat ISIS fighters in Iraq, provide security to the Iraqi people and set conditions for follow-on operations to increase long-term stability. 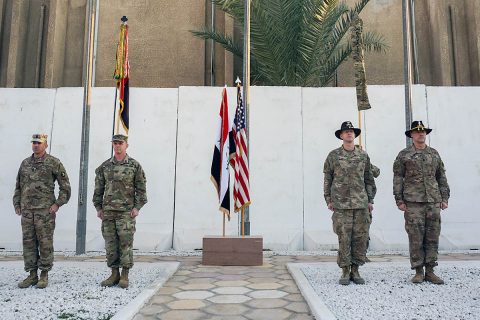 “The best part of what we do are the relationships we build along the way,” said Brig. Gen. Austin Renforth, commander of Joint Operations Command – Iraq.

During the transfer of authority ceremony, Brave Rifles leaders cased their regimental colors, and Bastogne uncased their brigade colors as they kicked off the official start to their deployment.

“We are proud to be joining our XVIII Airborne Corps headquarters and coalition partners in the ongoing fight against ISIS,” said Col. Derek Thomson, 1st Brigade Combat Team, 101st Airborne Division commander. “We are also proud to join Brig. Gen. Renforth and the JOC-I to stand shoulder-to-shoulder in this historic mission.”

The brigade deployed to Afghanistan from 2013-2014 and completed a rotation as the regionally allocated force to U.S. Army Africa in 2017.