Cookeville, TN – Tennessee Tech had not lost at home this season and was tied for the lead in the Ohio Valley Conference. Insert Austin Peay State University (APSU) women’s basketball team.

The Governors handed the Golden Eagles their first home loss this season in a highly efficient performance, 72-65, Thursday, at the Eblen Center. 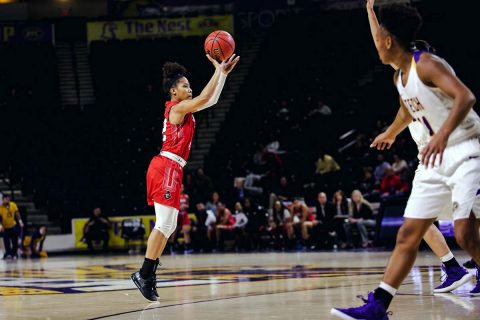 The first quarter was the Arielle Gonzalez-Varner [2] show, as the junior forward scored the first eight points for the Govs and had 10 total points in the period.

In addition, Tennessee Tech’s leading scorer Jordan Brock picked up two fouls in the first five minutes and was forced to the bench. Gonzalez-Varner continued her dominance of the first period, with a monster block on one end that led to a Kasey Kidwell [3] bucket in the lane as the Govs jumped out on a 7-0 run.

The Gregory duo of Keisha and Gabby each hit threes in the second quarter, but the Govs could not get much else to fall for most of the quarter. Brock returned after sitting on the bench for about eight in-game minutes, but after just two points on one-of-five shooting, picked up her third foul and was once again relegated to the bench for the rest of the half.

Despite Brock’s absence, the Golden Eagles went on an 8-0 run to retake the lead, before Michaela Campbell [4] hit a three-pointer as the shot clock expired to spark a 9-0 Govs lead. However, TTU seized some momentum as Kentoria Alexander hit a buzzer-beater to cut the Govs lead to just three at halftime.

The Govs continued to fend off any offensive spark that TTU was putting together, highlighted by a Campbell long rebound and pass that Tom Brady would have been proud of, as Ferby converted on the break in traffic. Gregory then showed her individual skill, sizing up a TTU defender, blowing by her and then drawing contact from the help defender while finishing.

Gregory made the free throw that had the Govs on a 6-0 run before Alexander hit another buzzer-beater, this time a fadeaway jumper. Despite Alexander’s heroics, the Govs led by five going into the fourth.

Gregory’s free throws at the start of the fourth put the Govs up nine, their largest lead of the game, but fourth quarter scoring was at a premium for both teams. The Golden Eagles just had two points in the first seven minutes of the quarter, but then madness ensued.

Gregory made both of her free throws before Brock made another three, as the Govs only held a four-point advantage. After a long official review (the last two minutes took over twenty real-time minutes), Crawford stepped up to the line and made it a six-point game once again. The Govs had the ball up four before another questionable foul call gave the ball back to TTU.

However, the Govs got a stop and Ferby hit two free throws to give the Govs a six-point lead. The Govs keyed in on Brock again, forcing her to pass to Harris, who missed a three and the Govs were finally able to close the game out.

After not winning a road game in their first eight attempts, the Govs have won two road games in a row.

The Govs hit 14 of their final 16 free throws en route to the win.

The Govs were the first team to defeat Tennessee Tech on the road this season.

With 40 rebounds, the Govs grabbed their most rebounds on the road this season.

The 40 rebounds are also tied for the most in a game for the Govs in OVC play (Tennessee State).

The Govs now improve to 5-4 in the OVC and are tied for fifth with Southeast Missouri.

The Govs held Brock to 11 points, with nine coming in the final two minutes.

On Brianah Ferby [1]
“Bri didn’t start and she would be the first to tell you that she was struggling offensively, but she had an outstanding game. She was aggressive and took shots when she needed to. She also had big steals and two big free throws at the end.”

On the game
“I think making free throws at the end was huge because we made some mistakes during their comeback, but overall, to come in here against a really good team and compete for 40 minutes. It was just a great team victory.”

Up Next for APSU Govs

The APSU Women’s Basketball teams is back in action on Saturday, February 2nd for another road contest at Jacksonville State.