Clarksville, TN – As one of four teams tied atop the league at 8-2, Austin Peay State University (APSU) men’s basketball looks to take care of business when it returns home for a Thursday night, February 7th, 8:00pm tip-off against SIU Edwardsville in the Dunn Center. 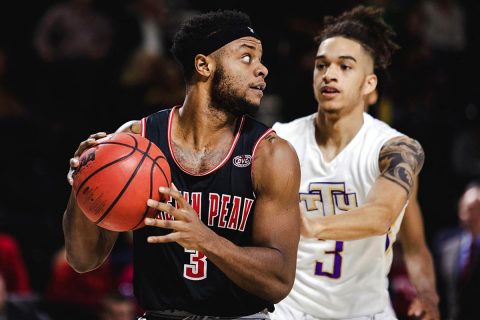 The Govs look to do their part to remain at the top of the league; none of the principles involved in the four-way tie between Austin Peay, Murray State, Belmont or Jacksonville State will square off this weekend, meaning all four will look to avoid upsets heading and secure their standing in the top-four.

SIU Edwardsville does some things very well, boasting a plus-1.6 turnover margin and getting to the line, making 342 free throws in 500 attempts, all among the top marks in the league. But the Govs (at plus-3.83 turnover margin and 359-of-513 at the stripe) do those things just a little better.

The Cougars feature four players averaging in double figures, led by Tyresse Williford, the current OVC Newcomer of the Week. The Govs would do well to finish this one off in regulation; SIU Edwardsville leads the country with five overtime contests played this season and eight total overtime periods, including a double-OT win last Saturday at Eastern Kentucky and a three-overtime thriller at Southeast Missouri, January 24th.

Taylor dropped a career-high 33 points on the Cougars, helping Austin Peay hold off a feisty SIU Edwardsville squad in a 79-71 victory at the Vadalabene Center, January 17th. Try as they might, the Govs could never quite convince the Cougars to go away, leading by three at the break and just five with under eight to play before an 11-3 run put the Cougars awawy for good.

Austin Peay’s defense held the Cougars at bay most of the evening, allowing just 37.9 percent shooting and securing a dozen steals.

Taylor needs just 43 points to become the 36th member of Austin Peay’s 1,000-point club, and one of just six to do so in his first two seasons.

A win would be the Govs ninth consecutive win against the Cougars, their longest active streak against a league foe and longest against any OVC opponent since an 11-game streak against Jacksonville State (January 4th, 2007-Jan. 14, 2012).

When Jacksonville State missed all 15 of its three-point attempts against the Govs, it marked the first time since March 6, 2009 Austin Peay had held its opponent without a make from deep, a span of 313 games.

Jabari McGhee [4] is shooting 61.5 percent from the floor over his last four games.

Check back at LetsGoPeay.com and on Austin Peay’s Official Athletics Facebook page often for up-to-date news about all Governor athletics, as well as the Governor men’s basketball Twitter page (@AustinPeayMBB). Live stats will be available during the game at PeayStats.com, and all home games and Ohio Valley Conference games can be viewed on the ESPN+ app.

Postgame video interviews and other videos from around APSU Athletics can be found on our YouTube page (www.youtube.com/letsgopeay). [6]