The Governors (10-11, 5-5 OVC) split the two road contests they had last weekend, but maybe not in the fashion most were expecting. 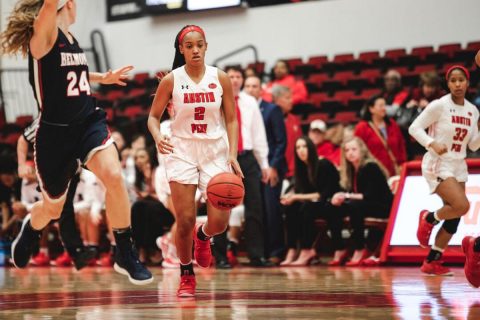 The Govs took it to league-leading Tennessee Tech at the Eblen Center last Thursday, behind Brianah Ferby’s [1] season-high 20 points on 8-of-11 shooting from the field. Ferby also iced the game with a pair of free throws after a late Tech charge.

However, the trip to Alabama to face off with a physical Jacksonville State team did not end in the same result.

The Gamecocks held the Govs to season lows in field goal percentage (29.2 percentage) and field goals made (14). Ferby led the Govs with a season-high six rebounds and Maggie Knowles [2] hit three triples, but the Gamecocks dominated inside the paint, outscoring the Govs 30-14, as they pulled away in the second half.

It cannot be any more even of a matchup, as the Cougars (10-11, 5-5 OVC) have an identical record and won by just a single point in the waning seconds of the meeting in Edwardsville last month.

The Govs used a 13-0 run to tie the game going into the fourth quarter but an Allie Troeckler runner in the lane with four seconds to go gave the Cougars the victory. Since the matchup, the Govs have won three of five while the Cougars have lost three of five.

The Govs cannot allow center Sydney Bauman to run rampant as she did at SIUE in the first meeting. Bauman finished with 22 points and 11 rebounds, as she dominated the paint and the glass. Keisha Gregory [3] had one of her season’s best games, finishing with 20 points to go along with six steals and four assists.

Despite finishing with their best road shooting percentage at the time, the Govs grabbed a season-low 19 rebounds.

The Cougars do not score in bunches, as they have only cracked the 70 point mark twice in 10 conference games. The Cougars also shoot under 30 percent from three-point range, but make up for it with stifling defense and great rebounding. The Cougars are the best in the OVC at defending the three-point line and are second in rebounds per game, with 40.9.

Troeckler leads the Cougars with 9 points per game on a highly efficient 46 percent shooting. Bauman, who the Govs could not contend with last time out, is the main inside presence, averaging 7.5 points per game, as well as leading the team with 8.3 rebounds per game.

There will be a radio broadcast of the game on WAPX (91.9 FM). Live stats will be provided and @AustinPeayWBB will tweet live updates via Twitter.