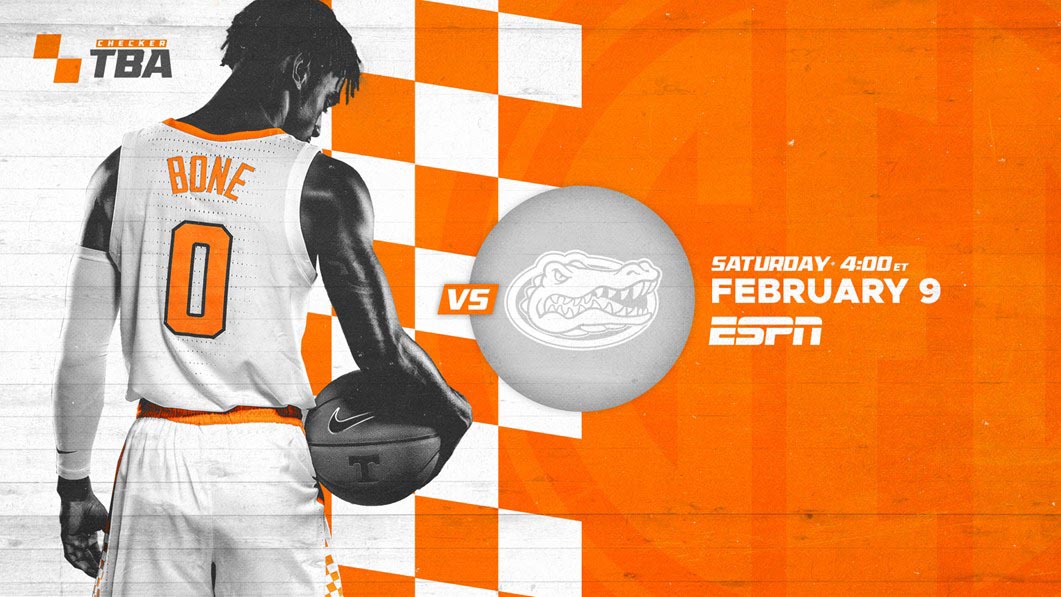 Knoxville, TN – No. 1 Tennessee Vols host the Florida Gators on Saturday for a matchup in front of a sold-out Thompson-Boling Arena.

Tennessee announced plans earlier in the week to “checker” Thompson-Boling Arena for the matchup with its SEC rival. Fans planning to attend the sold-out showdown, which tips off at 3:00pm CT on ESPN, are encouraged to visit CheckerTBA.com to learn whether their seats are in a section designated to wear orange or white. 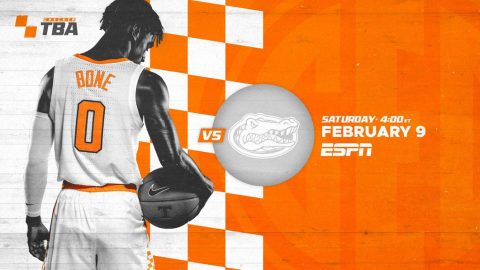 After being a close game throughout, UT ended the last 44 seconds of the game on a 9-0 run, which was capped off by Grant Williams driving to the paint and finding Admiral Schofield in the corner for a game-sealing 3-pointer.

The dynamic duo of Schofield and Williams has been one that has fueled Tennessee all season. This week, they were both tabbed to the late season top 20 watch list for the 2019 John R. Wooden Award Player of the Year.

Florida (12-10, 4-5 SEC) is coming off one of the toughest two-week stretches in the entire league, with games vs. Ole Miss, vs. Kentucky, at Auburn and then capped with a trip to Thompson-Boling Arena. Standing as one of the league’s best defensive teams, the Gators allow a league-best 63.4 points per game while also holding opponents to 41-percent shooting from the floor.

Florida has held eight opponents to fewer than 60 points this season, including Arkansas, Stanford and West Virginia.

The Vols have a 46-16 edge when the series is played in Knoxville.

Tennessee has won two straight in the series, dating to last season.

Make the Vols 7-1 all-time as the AP’s top-ranked team.

Tennessee associate head coach Rob Lanier was an assistant coach under Billy Donovan at Florida from 2007-11.

At tipoff Tuesday, 77 full days will have elapsed since Tennessee’s last loss.

The Vols have shot 50 percent or better 15 times this season and rank second in the country with a .515 field-goal percentage.

In the second meeting of the season, coach Mike White and Florida (12-10, 4-5 SEC) are coming off one of the toughest two-week stretches in the entire league, with games vs. Ole Miss, vs. Kentucky, at Auburn and then capped with a trip to Thompson-Boling Arena.

Senior guard KeVaughn Allen (12.9 ppg, 2.6 apg, 1.5 spg) has been the best player for Florida this season, leading the team in scoring and steals while ranking second in assists.

Noah Locke (11.4 ppg, .421 3FG%) is the team’s other double-digit scorer. The freshman guard is far and away Florida’s most dangerous 3-point shooter, with nearly double the amount of threes as any other Gator. Of his field goals this year, 74 percent (61 of 82) have come from beyond the arc.

The paint has been dominated by Kevarrius Hayes, who leads the team in rebounding (6.1 rpg) and blocks (2.0 bpg) while averaging 7.0 points per game.

Standing as one of the league’s best defensive teams, the Gators allow a league-best 63.4 points per game while also holding opponents to 41-percent shooting from the floor. Florida has held eight opponents to fewer than 60 points this season, including Arkansas, Stanford and West Virginia.

UF is one of the most talented teams in the SEC this season. Florida has played one of the toughest schedules in the country with games at Florida State, vs. Oklahoma, Michigan State and at TCU.

A drive by Grant Williams followed by a dish to Admiral Schofield for a 3-pointer in the corner was the final blow that gave No. 3 Tennessee a hard-fought road win at Florida on January 12th, 2019.

The Vols defeated the Gators, 78-67, in Exactech Arena.

After being a close game throughout, the Vols ended the last 44 seconds of the game on a 9-0 run to clinch the 11-point victory. Late in the game, Tennessee was able to thwart the Gators’ offense. Florida was held without a field goal over the last 3:35 of the game and scored just four points in the final six minutes of play.

Williams finished with a game-high 20 points while also leading Tennessee with nine rebounds.

After a 3-pointer by Florida’s KeVaughn Allen made it a 41-35 Gators lead at the 19:08 mark, Tennessee responded with a 15-4 run, which was capped by a one-handed slam from Williams that forced Florida to call a timeout with 14:04 left.

The Allen three was one of just seven made baskets for Florida in the second half, as Tennessee held them to 28 percent shooting. For the game, the Florida offense shot just 35.2 percent from the field.

After having just three points at the midway point, Jordan Bowden helped put Tennessee in front in the second half, scoring 12 consecutive points for the Vols over a 1:49 stretch in the second half. His effort put the team back in front for good with 5:36 to play in the game, as he broke loose on a fast break and threw it down with a right-hand jam.

Bowden finished the game with 17 points, going 6-of-7 from the free-throw line, and led Tennessee with two steals. Jordan Bone tallied a team-high five assists and added eight points and five rebounds.

The legendary Bernard King recorded the third-best scoring performance in school history with a 43-point, 20-rebound effort as the Vols topped the Gators 93-84 on January 17th, 1976, in Stokely Athletics Center.

Dane Bradshaw’s breakaway layup with 20.1 seconds to play proved to be the winning basket as the Vols upset second-ranked Florida 80-76 in Knoxville on January 21st, 2006.

The Vols upset fifth-ranked Florida 86-76 on Senior Day in Knoxville behind Chris Lofton’s 21 points on February 27th, 2007. ESPN College GameDay broadcast live from Rocky Top, Peyton Manning addressed the Vols in the locker room before the game, and Pat Summitt donned cheerleader garb and led the sold-out crowd in a rendition of Rocky Top during a media timeout.

It is the longest active win streak in Division I.

Tennessee’s 21-game home win streak is the second-longest active streak in Division I. Houston has won 31 straight at home; Buffalo, like UT, has won 21 straight.