Birmingham, AL – The Austin Peay State University (APSU) softball team saw its late-inning rally fall short, Sunday at Mary Bowers Field in the final day of the UAB Tournament, as the Govs came up short to the Blazers, 11-6. 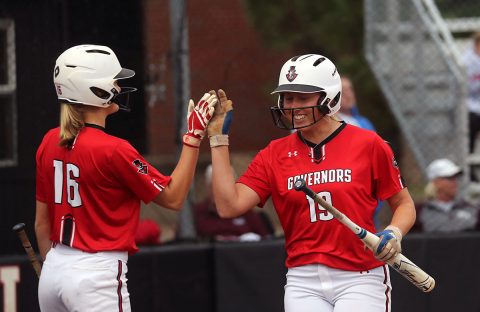 The Govs (3-2) saw the tournament host get out to a 9-0 advantage after four innings but put together a five-run fifth inning to get back into the contest.

Kelsey Gross [1] would get the inning started with a home run, her first collegiate round tripper, followed by a single by Brooke Pfefferle [2] and a walk to pinch hitter Victoria Eccleston [3].

A groundout later, Kacy Acree [4] would drive in Pfefferle, with a single to center, making it 9-2.

Lexi Osowski [5] would then hit the Govs second home run of the inning, a three-run blast over the left-center field fence to cut the deficit to 9-5.

But that would be as close as the Govs would get, as the Blazers (4-2) added singles runs in the fifth and sixth to push its lead out to 11-5 before the Govs picked up their final run of the game, in the top of the seventh, on a single by Carly Mattson [6] to score Osowski for the 11-6 final.

Mattson, Gross and Acree all finished the contest with two hits each to lead the Govs.

Kacy Acree [4], Danielle Liermann [7] and Lexi Osowski [5] reached base in all five games of the opening weekend.

Morgan Rackel’s [8] one strikeout on Sunday gives her 219 in her career, tying Lydia Money-Gunn for seventh all-time in school history.

Kelsey Gross’ [1] eight putouts at first base were a career single-game high.

On Sunday’s performance
“We didn’t get the outcome we would have liked today, but I am proud of the girls and the way they battled back and made UAB work until the final out of the game.”

On the overall weekend
“We saw and did a lot of good things this opening weekend, but we also saw a lot of things that we need to, and can, get better at. This is just the first weekend and I know this team will continue to work hard to get better.”

Next up for Austin Peay State University Softball

Austin Peay State University Softball is off until next weekend when they travel to Lafayette, LA to play in the 33rd Annual Louisiana Classic.