Clarksville, TN – The Austin Peay State University (APSU) softball team will face its first nationally-ranked opponent in two years, this weekend at the 33rd Annual Louisiana Classic, as the Govs look to build on its season-opening success. 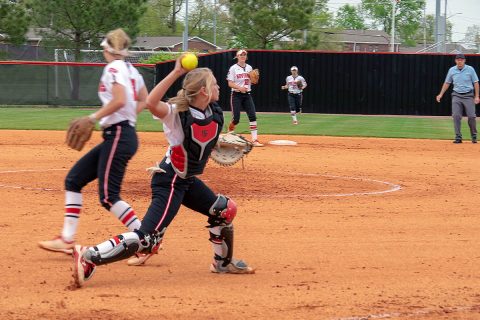 The Govs (3-2) will be joined at the Louisiana Classic by Stephen F. Austin, Jackson State and the nation’s 13th-ranked team, Louisiana.

APSU opens play, 11:00am, Friday versus Stephen F. Austin, with a matchup under the lights versus Louisiana beginning at 6:30pm.

Saturday will see the Govs close out the round-robin part of the tournament with a contest versus Jackson State, with a 10:00am first pitch.

The teams will then be seeded for the tournament semifinal games, also on Saturday, with the top seed facing the fourth seed at 3:00pm, followed by the second and three seeds playing at 5:30pm.

The classic will conclude on Sunday with the consolation and championships games, slated to begin at 10:00am and 12:30pm respectively.

Offensively, the Govs had four players hit for a .500-or-better clip over the opening weekend, led by this week’s Ohio Valley Conference Player of the Week, Kacy Acree [1]. She batted .533 last week, which included two doubles, two home runs and 11 RBIs.

In the circle, Morgan Rackel [5] led the Govs pitching staff over the opening weekend of play, posting a 2-1 record with 15 strikeouts in 12 innings of work. Kelly Mardones [6] (1-0) picked up the other Govs win, while Gross (0-1) recorded a save.

Stephen F. Austin
The Ladyjacks are 5-1 after their first six games of 2019, including a 1-0 win over 24th-ranked Mississippi State.

Kassidy Wilber anchors the SFA pitching staff, going 4-0 this past week with 32 strikeouts in 22 innings pitched.

Jackson State
The Tigers are 0-7 so far this season after dropping a mid-week doubleheader to Belhaven and are led at the plate by Kelsey Smith (.286, four RBI) and Kayla Owens (.286, one RBI).

Louisiana
The 13th-ranked Ragin’ Cajuns are a perfect 6-0 coming into their second home tournament and after defeating Cal in a mid-week doubleheader.

In the circle, Summer Ellyson is 4-0, with 33 strikeouts in 25 innings pitched, while Kandra Lamb is 2-0, with 16 strikeouts after 10 innings of work.

The 33rd Annual Louisiana Classic is the first time since the 1990 season the Govs have played in the State of Louisiana.

This weekend’s matchups versus Stephen F. Austin and Louisiana are the first of nine teams the Govs will play this season that participated in post-season games past their respective conference tournaments in 2018.

The game this weekend versus 13th-ranked Louisiana is the first nationally-ranked opponent the Govs have played since a 6-0 loss at 23rd-ranked Ole Miss on March 4th, 2017.

The 13th-ranked Louisiana squad is the highest ranked team the Govs will have faced since squaring off versus 14th-ranked Louisville during the 2013 season.