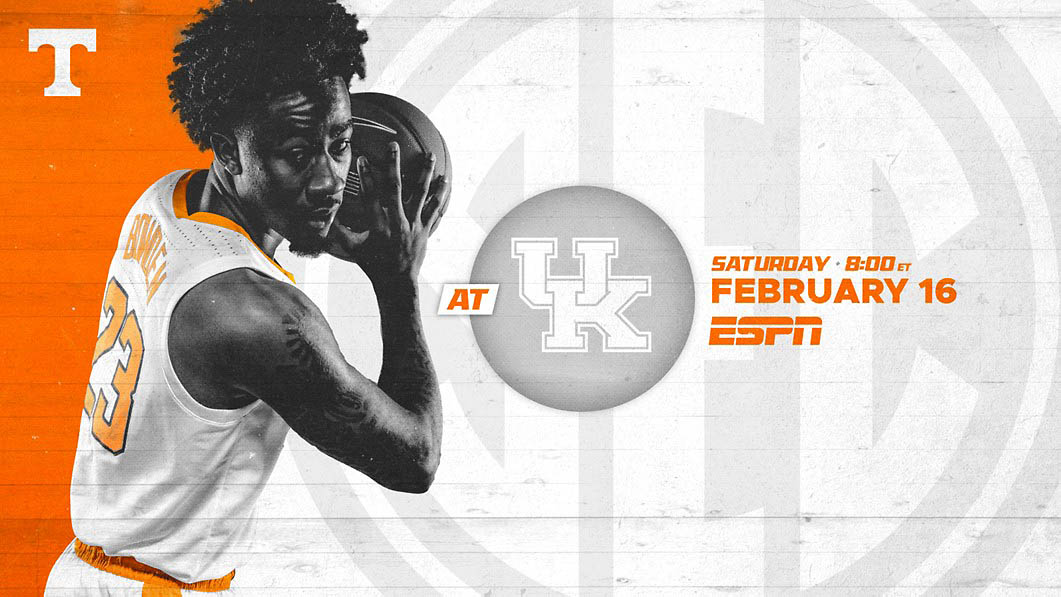 Knoxville, TN – For only the third time in program history, No. 1 Tennessee is set to compete in a top-5 matchup Saturday, taking on No. 5 Kentucky on the road in Rupp Arena.

Saturday’s game marks the first meeting of two top-five SEC teams since March 8th, 2003, when third-ranked Florida fell to second-ranked Kentucky, 69-67, in Gainesville. The game will tip at 7:00pm CT and will be televised on ESPN and can also be viewed online through WatchESPN. Fans can listen live on their local Vol Network affiliate to hear Bob Kesling and Bert Bertelkamp describing the action. 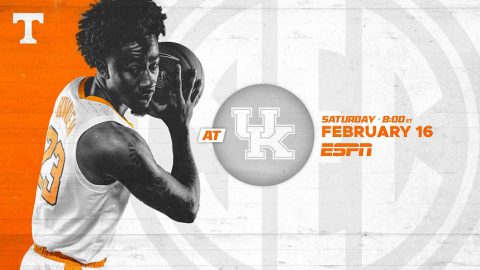 Nine of those wins were by double digits, as UT boasts the best scoring offense in the conference and fifth nationally at 85.5 points per game.

However, starting with Saturday’s game, Tennessee’s next seven matchups will be its toughest stretch of the entire season, with two games against Kentucky as well as road contests at Auburn, LSU and Ole Miss.

Prior to Kentucky’s loss to LSU on Tuesday, John Calipari’s squad had been playing the best basketball of any team in the country. UK has logged ranked wins over Auburn, Louisville, Kansas, Mississippi State and North Carolina, while playing a similar style as the Big Orange.

UT ranks first in the SEC in field-goal percentage and field-goal percentage defense, while UK ranks second (.475 FG%, .407 FG% defense) in those categories. Sophomore forward P.J. Washington (14.4 ppg, 8.1 rpg, 1.1 bpg) has inserted himself into the National Player of the Year conversation with his impressive play lately.

Tennessee trails the all-time series with Kentucky, 154-71, dating to 1910. The Vols have won two of the last three meetings.

The Wildcats have a 90-17 edge when the series is played in Lexington.

Make the Vols 9-1 all-time as the AP’s top-ranked team.

Improve Tennessee’s record on Saturdays to 10-0 this season.

This is the first matchup of two top-five SEC teams since March 8th, 2003, when third-ranked Florida fell to second-ranked Kentucky, 69-67, in Gainesville.

Saturday’s game is the first time an SEC team ranked in the top five has hosted the top-ranked team since February 2nd, 1966, when No. 3 Vanderbilt hosted No. 1 Kentucky.

At tipoff Saturday, 85 full days will have elapsed since Tennessee’s last loss.

The Vols have shot 50 percent or better 16 times this season and rank second in the country with a .515 field-goal percentage.

Point guard Jordan Bone is directly responsible for 33.1 percent of Tennessee’s total scoring this season when you factor in his points scored and the points resulting from his assists.

In SEC games, Tennessee averages a league-best 11.3 turnovers per game.

Prior to Kentucky’s loss to LSU on Tuesday, John Calipari’s squad had been playing the best basketball of any team in the country. In non-conference play, UK logged ranked wins over North Carolina, Louisville and Kansas. Kentucky dropped its first matchup of the SEC slate but responded by winning its next nine conference games.

Sophomore forward P.J. Washington (14.4 ppg, 8.1 rpg, 1.1 bpg) has inserted himself into the National Player of the Year conversation with his impressive play lately. As the team’s leading scorer and rebounder, Washington has scored at least 20 points in five of the last six games and recorded three of his seven double-doubles during that stretch.

Despite erasing a 17-point deficit, No. 2-seeded Tennessee fell to Kentucky in the SEC Tournament Championship Game, 77-72, at the Scottrade Center in St. Louis, Missouri, on March 11th, 2018.

All-SEC wing Admiral Schofield led the Vols with 22 points and 10 rebounds for his third double-double of the season. He was Tennessee’s lone representative on the All-Tournament Team.

After a corner three by Jordan Bone banked off the glass for a much-needed basket, Tennessee made it a 68-67 game in favor of UK with 1:13 remaining. The Wildcats sealed the game, though, after a step-back jumper and a pair of free throws made it 72-67. Bone finished with 12 points and four assists.

Kentucky responded with a 14-2 run of its own to gain a 52-43 advantage with 12:29 left, forcing the Vols to call a timeout. Just when it seemed the Wildcats were going to pull ahead, the Volunteers went on a 14-3 run of their own to regain a 57-55 lead, finished by SEC Co-Sixth Man of the Year Lamonté Turner’s deep three to beat the shot clock. He finished with 10 points and four assists.

Everything was falling for Kentucky in the first half, as the Cats took a 33-16 lead with less than five minutes left in the period. With the game on the line, the Vols responded by going on a 15-3 run to go into halftime down just five at 36-31.

The Kentucky series is UT’s oldest and most-played among SEC opponents. The Vols and Wildcats first met on February 5th, 1910, and have clashed 225 times over the years.

On 11 different occasions—first in 1950 and most recently in 2017—Tennessee has defeated a Kentucky team ranked in the AP top five.

No program in college basketball has logged more wins over Kentucky than Tennessee (71).

Kentucky is one of only two SEC?schools (along with Alabama) to lead its all-time series against the Volunteers.

Tennessee has 14 all-time wins over the Wildcats at Thompson-Boling Arena, including three straight.

John Calipari is the league’s active leader in career wins, with 698. Rick Barnes is a close second with 683 victories to his credit.

Among all active Division I head coaches, Calipari and Barnes rank sixth and seventh, respectively, in total head coaching wins.

On Saturday, John Calipari will coach his 25th career game against the Vols. Among active college coaches, that stands as the second-most career meetings against Tennessee.

Since UK coach John Calipari returned to the college game in 2000-01, Tennessee has dealt him nine losses. No team has more wins over Calipari-coached teams during that span.

It is the longest active win streak in Division I.

Tennessee’s 23-game home win streak is the second-longest active streak in Division I. Houston has won 32 straight at home; Buffalo, like UT, has won 22 straight.