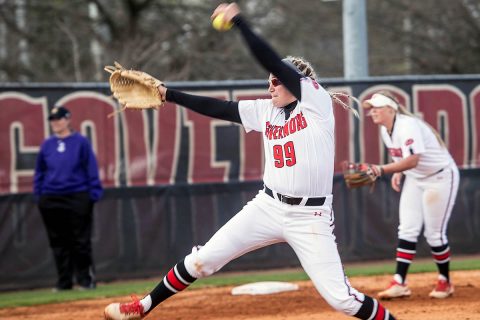 It was the second no hitter in as many seasons for Rackel, with her first no-hitter also coming by way of a 1-0 final versus Eastern Illinois on April 29th, 2018.

Rackel would finish the contest with seven strikeouts and two walks, needing only 85 total pitches in her seven innings of work, with no Jackson State (0-11) hitter getting past first base.

Austin Peay (5-5) would score its run in the bottom of the fifth inning with Drew Dudley [2] receiving a bases-loaded walk to force in pinch runner Kelsey Gray [3] with what turned out to the game winner.

Austin Peay is off until next weekend when they return to Louisiana to face McNeese State for a three-game series.

The no-hitter versus Jackson State was the eighth overall in program history.

The game-winning RBI by Drew Dudley [2] was the first of her career.

Kelsey Gray [3] has scored a run in her last two pinch-running chances.

On closing weekend with a win
“It was nice to finish the weekend with a victory. We had a couple of lineup changes out there today and both played well, with Brooke Pfefferle [7] getting her first start at shortstop today and Katelyn Smith [8] throwing out a runner on a stolen base attempt.”

On Rackel’s no-hitter
“Morgan (Rackel) threw well today and was really in control throughout. She has really been throwing well for us this season.”