After a first half back-and-forth against a UT Martin team fighting for its life among the Ohio Valley Conference’s swollen middle-class, the Govs blew away the Skyhawks in the second half to remain in the hunt for a two-day bye into the upcoming OVC Tournament semifinals after a 92-78 win on Senior Night. 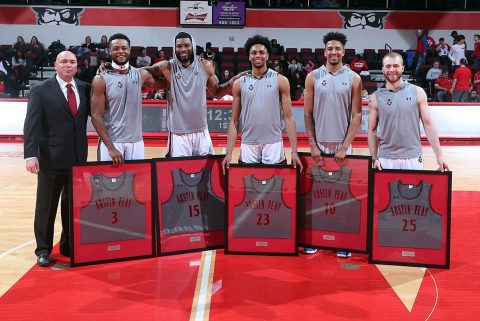 That’s a pretty unsustainable pace, but the worrisome part was that Craig Randall II—who had not yet been cleared when these teams met on January 12th—hit four of those and had 11 points by the 15-minute mark as the Govs worked to contain the Duquesne transfer.

Eventually the Govs found the remedy for Randall—he missed his next three shots and scored just two more points in the half—but the Austin Peay (21-8, 13-3) offense was not the high-efficiency machine it has been for much of the year.

Except for Zach Glotta [1]—the O’Fallon, Missouri native put together a Senior Night performance he’ll look back fondly on, hitting five threes in the opening half alone.

But otherwise the first half was a famine for the Govs, who hit just 37.0 percent when anyone but Glotta put up a shot. Austin Peay was fortunate to enter the half down by just two points thanks to—who else?—Glotta, whose final three of the half swished home with eight seconds remaining to send the game into the break at 42-40 in favor of the visitors.

The teams traded buckets over the opening three minutes of the second half before the Govs took off on a 15-6 run featuring a pair of threes from Glotta and another from freshman Antwuan Butler [2], his first since January 24th.

The Skyhawks pulled to within a possession but senior Chris Porter-Bunton [3] scored five straight points and Glotta nailed yet another three, his career-high seventh, to give Austin Peay its first double-digit lead of the evening.

From there, the Govs rolled; Austin Peay outscored UT Martin 30-19 over the last 10 minutes of play, with sophomore Terry Taylor [4] scoring 12 of his 25 points during the game-clinching stretch. Glotta finished with a career-high 26 points and eight three-pointers, one short of the Austin Peay single-game record.

The 14-6 discrepancy in three-point shooting seems like low-hanging fruit to pick here, so let’s look instead to the glass, where Austin Peay enjoyed a 41-30 advantage, their second straight double-digit differential on the positive side. Of those, 17 were offensive rebounds, which led to a 17-9 advantage in second-chance points. The Govs grabbed 37 offensive boards in two games this week, the most over a two-game span since the Calvary-Purdue Fort Wayne contests back in December.

Make it six straight games without committing more than nine turnovers for the Govs, who committed just eight against the Skyhawks. Just six times since the turn of the century has Austin Peay gone entire seasons with six or more games committing 10 or fewer turnovers.

The win is just the third this season when Austin Peay found itself trailing at halftime.

Porter-Bunton reached double figures for the sixth consecutive game, finishing with 18 points. He stands at 967 career points, 33 away from the 1,000-point club with two regular season games plus whatever tournament run the Govs make remaining. Over the last five games, he’s averaging 2.8 threes per contest, hitting 53.9 percent (14-of-26) during that span.

The 52 points scored by the Govs equaled their season second-half high.

The Govs four-game win streak against the Skyhawks is their longest in the series since a six-game streak from 2010-12.

Fourteen three-pointers were most this season by the Govs and one short of the Austin Peay record in the Dunn Center. The Govs have now reached double-digits from beyond the arc in eight games this season, most in a single season since the turn of the century.

With 12 rebounds, Taylor now has 250 in his sophomore season; he’s one of two Govs, along with Bob Bradley, to pull down at least 250 boards in each of his first two seasons at Austin Peay.

Austin Peay’s turnover margin over the last 12 games is plus-70, an average of plus-5.8 per game.

In addition to nearly toppling the single-game school three-pointer record, Glotta passed Donald Tivis (1988-91) for eighth all-time in career three-pointers; he’s now 177 for his career, five away from passing Anthony Campbell (2008-12) for seventh.

With the win, the Govs are:

On Glotta
“God rewards people who are committed in everything they do, and Zach exemplifies that. He exemplifies everything that is good in college athletics. He’s had his ups and downs, but tonight was his night. All those guys, those seniors, their belief in what we’ve put together has been incredible.”

On the second half
“Isaiah Hart’s [9] defensive performance down the stretch totally disrupted the game. I’ve seen it all year; that dude has unbelievable hands and anticipation. I challenged Terry at halftime and boy what a response he had.”

On the coaching staff
“When I got this job I thought the most important thing I had to put together was a great, mature staff. I didn’t need to be coaching the coaches. Dalonte Hill [10] and I have been in the trenches together. Rick (Cabrera) I coached. Sergio (Rouco) and I have been friends for 20-plus years and he’s been a head coach. I knew we would have to do this with coaching and teaching and this staff has just been huge.”

Up Next for APSU Govs

One final road swing ahead OVC Tournament finds the APSU Govs in Richmond, Kentucky, next Thursday to take on Eastern Kentucky; that contest is scheduled for a 6:30pm (CT) tip-off.