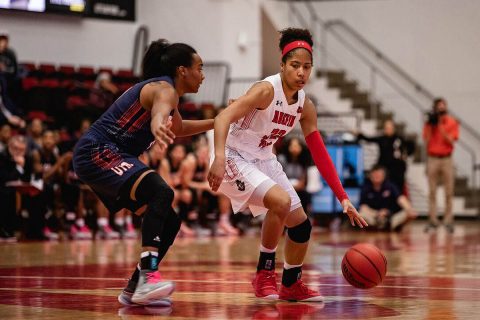 Against the Redhawks, the Govs found themselves down by six entering the fourth quarter, but started the final period on an 11-1 run to seize control. Maggie Knowles [1] hit a career-high four three-pointers to push the Govs ahead.

The game against UT Martin was a far cry from the horrible 26-6 deficit the Govs faced after one quarter in Martin. Leading after the first quarter, the Govs embarked on a 17-0 second quarter run to go up as many as 16, but the Skyhawks did not go away.

After making it a more manageable 11-point deficit at halftime, they kept creeping closer and closer, eventually taking the lead with about three minutes to go. Keisha Gregory [2], who had a game-high 19 points, gave the Govs the lead back with an and-one, but UT Martin hit the go-ahead bucket with just 20 seconds to go.

About the Easter Kentucky Colonels

Simply put, the Colonels (2-25, 0-16 OVC) are having a season to forget. The Colonels have still not won in the Ohio Valley Conference and are also yet to beat a fellow Division I opponent.

Last time out, the Govs put 100 points up, the first time they hit 100 in a conference game since 2002. There were many highlights in the game, with six players scoring in double figures, led by Gabby Gregory’s [3] career-high 20 points. Nieja Crawford [4] also recorded a double-double with 10 points and 11 rebounds.

The Colonels rank near the bottom in the league in most metrics, but are decent at defending the three-point shot. The Colonels only allow their opponents to shoot 31 percent from beyond the arc, but only shoot 29 percent themselves.

Shay Solomon will be the focal point of the offense as the team’s second-leading scorer (10.5 ppg) and rebounder (6.1 rpg). Solomon had a game-high 23 points against the Govs, using her explosiveness to get to the basket routinely, but had seven turnovers, the same number the Govs had as a team.

The Colonels do receive a boost in getting back leading scorer Abby Wright. Wright, who averages just over 12 points a game, played the opening weekend of conference play, but missed every game up until last weekend. Wright only had seven points in the game against APSU, but Katie Caifes stepped up and had a nice game with 10 points and 10 rebounds.

The game will be broadcast live on ESPN+. Eastern Kentucky will also provide live stats for the game and @AustinPeayWBB will tweet live updates.