Nashville, TN – Tennessee Titans quarterback Marcus Mariota, who finished his fourth NFL season, missed three total starts in 2018 due to injuries. Nevertheless, he posted his third consecutive winning record as a starter (7-6) and set the franchise single-season record with a 68.9 completion percentage.

Mariota’s 27 wins as a starting quarterback in his first four years with the club rank second in franchise annals behind only George Blanda’s 34 victories. Mariota is the fifth player in NFL history to record 12,000 passing yards (12,004) and 1,200 rushing yards (1,270) in his first four NFL seasons, joining Russell Wilson, Cam Newton, Jeff Garcia and Blake Bortles. 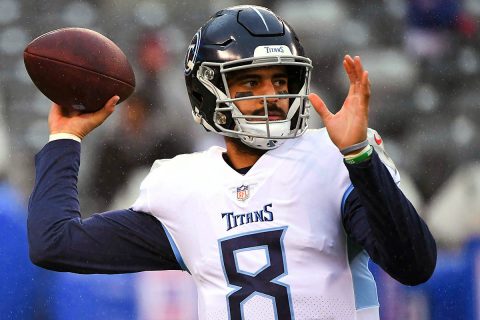 In addition to losing their starting quarterback for a portion of 2018, the Tennessee Titans offense played the vast majority of the year without the aid of their top pass catchers from the previous two seasons. Pro Bowl tight end Delanie Walker went down with a season-ending injury in the opener, while veteran wide receiver Rishard Matthews departed the team after three games.

Yet new stars emerged, including second-year wide receiver Corey Davis, the fifth-overall draft choice in 2017. Davis totaled 65 catches for 891 yards and four touchdowns, including a pair of memorable game-winners in the final minute of overtime against the Philadelphia Eagles (September 30th) and the final minute of the the fourth quarter versus the New York Jets (December 2nd).

Third-year running back Derrick Henry led the offense with 1,059 rushing yards, which ranked second in the AFC and seventh in the NFL.

The 2016 second-round pick notched his first career 1,000-yard season, while his 12 rushing touchdowns put him in a tie for the AFC lead and in a tie for third place in the NFL.

During a memorable Thursday night against the Jacksonville Jaguars on December 6th, Henry set the Tennessee Titans franchise single-game mark with 238 rushing yards and joined Tony Dorsett as the only players in league history with a 99-yard run from scrimmage.