Oxford, MS – A runner with three seconds left by National Player of the Year candidate Grant Williams [1] lifted No. 7 Tennessee to a 73-71 victory over Ole Miss at The Pavilion.

Ole Miss had an opportunity to respond, but fellow honors candidate Admiral Schofield [2] stepped up and took a charge to give Tennessee possession with one second left. The Vols (25-3, 13-2 SEC) inbounded the ball to run the clock out and clinch a double-bye for the SEC Tournament.

Williams led all scorers with 21 points on 7-of-13 shooting to go along with six rebounds, four assists, three steals and two blocks. 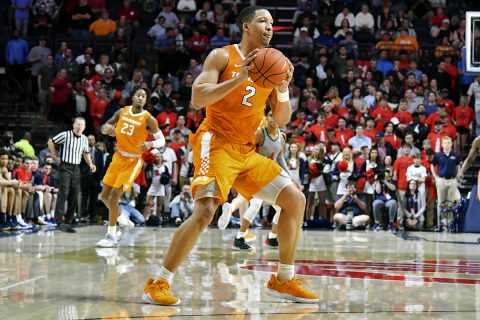 Tennessee Vols forward Grant Williams (2) handles the ball against the Mississippi Rebels during the first half at The Pavilion at Ole Miss. (Matt Bush-USA TODAY Sports)

Lamonte Turner [3] helped spark Tennessee’s offense in the second half, scoring 13 of his 17 points in the period on 6-of-7 shooting.

Schofield chipped in 11 points and six boards. The Vols shot 58 percent from the field in the period and 52 percent for the game.

It was UT’s defense that ended up being the difference in the game, holding the Rebels (19-9, 9-6 SEC) without a field goal during the final 2:40 in the game. Ole Miss was just 2-of-9 shooting from the field in the last nine minutes.

UM’s high scoring duo of Terence Davis and Breein Tyree both dropped 16 points to lead the Rebels on offense.

After Ole Miss hit the first shot of the second half, Tennessee responded with a 14-0 run to regain the lead at 48-41. Turner led the charge by scoring nine straight points.

During the opening stretch of the frame, the Vols caught fire on offense, hitting nine of their first 11 shots during the first seven minutes. The Rebels wouldn’t back down, though, using a 9-0 run to take a 58-57 lead at the 10:02 mark and forcing UT to call a timeout.

During the final 11 minutes, neither team pulled ahead by more than one possession. With 2:40 left, Tyree drilled a 3-pointer to give the Rebels a 69-67 lead. With less than a minute remaining, Tennessee played tight defense and forced a last-second shot that bounced off the rim, but Ole Miss got the offensive rebound and made the Vols foul.

Hinson knocked down both free throws to make it a 3-point game with 33 seconds left. UT responded with a jumper by Jordan Bowden [4] to cut it to one. After a foul and a missed free throw, Williams drove to the lane and knocked down a jumper with three seconds left on the clock.

The Vols jumped out to an early 11-3 lead by the 14:13 mark. However, a late 14-7 run shifted the game in favor of Ole Miss. The Rebels knocked down five of their final seven shots to take a 39-34 lead going into halftime.

While Tennessee found success with 22 points in the paint, Ole Miss sank five 3-pointers in the period and forced seven turnovers to keep the momentum. Davis had 11 points to lead all scorers at the break.

Point guard Jordan Bone [6] led UT with nine points and four rebounds in the half, while John Fulkerson [7] added six points and three boards off the bench.