Clarksville, TN – Austin Peay State University’s softball team will be heading to the East Coast this weekend, as they travel to Conway, SC, to participate in the Coastal Carolina Chanticleer Showdown.

Joining the Govs, who enter play this weekend with a 9-6 record after defeating Middle Tennessee in a mid-week contest, will be Radford, UNLV, Jacksonville and tournament host Coastal Carolina. 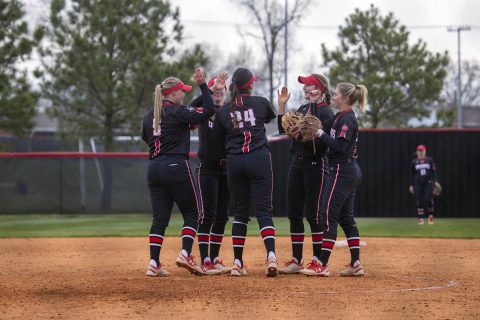 Austin Peay will open play in the showdown, 8:00am, on Friday versus Radford followed by a 9:45am contest versus UNLV.

Saturday will see the Govs face Coastal Carolina, at 1:00pm, and Jacksonville at 5:30pm, while its final game of the showdown on Sunday will see a rematch with Radford, beginning at 8:15am.

Radford
The Highlanders enter the weekend with a 5-6 record, but have lost their last five – including a 10-0 mid-week loss to Virginia Tech.

Offensively, they have two players that do most of their damage at the plate, led by Sydney Fisher, who is batting .450, with 10 RBIs, while Hannah Medlam is batting .394.

In the circle, Jessie Marvin leads the Highlanders pitching staff with a 2-2 record, a 1.53 ERA and 20 K’s.

UNLV
The Rebels are 11-3 this season and are one of the best teams in Division I in batting and defense, ranking 26th in batting average and sixth in fielding percentage.

In the circle, Jenny Bressler has won six of her first seven decisions, while sporting a 2.59 ERA and recording 39 strikeouts.

Coastal Carolina
The Chanticleers are 12-3 this season, with two of those three losses coming at the hands of nationally-ranked Tennessee and South Carolina.

Jacksonville
The Dolphins enter the weekend with a 5-7 record, dropping two of three games at their own tournament last weekend.

In the circle, Alyssa Bilodeau tops the Jacksonville pitching staff with a 2-2 record, a 1.67 ERA and 29 K’s.

This will be the second time the Govs have played in a tournament hosted by Coastal Carolina (Chanticleer Classic, 1999).

The Govs have never played UNLV.

The matchup versus UNLV is only the second time the Govs will have faced a team from the Mountain West Conference (Colorado State, 2003).

The Govs last played in the State of South Carolina during the 2015 season (Winthrop Adidas Tournament).

The Chanticleer Showdown is the third of four in-season tournaments the Govs will play in this season.