Clarksville, TN – Fresh off stunning one of the nation’s top teams, the Austin Peay State University (APSU) baseball team continues its first road trip of 2019 when it meets Indiana State in a three-game series, Friday-Sunday, at Bob Warn Field in Terre Haute, Indiana. 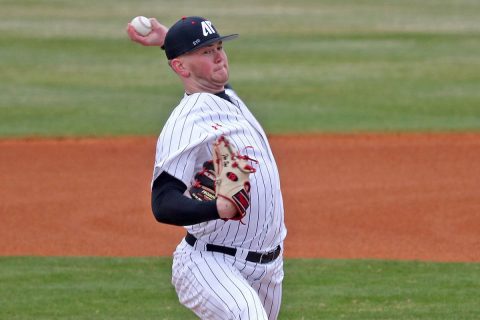 Austin Peay brings a three-game win streak into the weekend, a streak it extended with an extra-inning victory at No. 1 Vanderbilt, Wednesday. The Governors used a season-high 12 walks, including six in the final two innings, to battle back from a five-run deficit for the win.

Indiana State completed a season-opening eight-game road trip by splitting a two-game midweek set at Western Carolina. The Sycamores’ Wednesday loss to the Catamounts was their first of 2019 after opening the campaign with seven consecutive victories.

Center fielder Garrett Spain [1] saw his season-opening six-game hit streak end at Vanderbilt but used a bases-loaded walk in the 10th to record an RBI in his seventh-straight game. He is ranked 17th among Division I freshmen in batting average (.423).

Senior catcher David Martinez [2] is 8-for-17 (.471) during his current five-game hit streak. He has pushed his season average to team-leading .450, which ranks seventh among Division I catchers.

Utility man Parker Phillips [3] hit three home runs in Game 1 of the Northern Illinois doubleheader, going 3-for-4 with five RBI. The redshirt junior also scored six times on the weekend and leads the Govs with nine runs scored in 2019.

Sophomore shortstop Bobby Head [4] had three hits last weekend, but two of those left the park as he finished with five RBI. He  had just one home run last season.

Senior outfielder Aaron Campbell [5] had a hit and three walks (.333 OBP) during the SAF Dirt Classic, driving in two runs with a double in Game 1 against Northern Illinois.

Redshirt senior second baseman Garrett Kueber [6] has batted leadoff in his last three spots and he has responded by batting 4-for-13 with three RBI.

Junior Malcolm Tipler [7] posted his third two-hit outing of the season at Vanderbilt, both hits going for doubles including a two-run two-bagger in the fifth that closed the deficit to two runs.

With Tipler’s move into left field, freshman Gino Avros [9] has started at third base in three straight games. He has two hits, both doubles, and three walks in those starts.

Freshman Matt Joslin [10] came off the bench and delivered a game-tying two-run single in the ninth inning at Vanderbilt, Wednesday. Two of his three hits have delivered RBI.

Sophomore transfer Griffin Rivers [11] started the season’s first four games in left field before Tipler was moved into that spot against NIU.

Senior catcher Alex Sala [12] started Game 2 of the 2019 season behind the plate and has seen action four times off the bench for the Govs.

Right-hander Brandon Vial [13] will look to build on his season’s first start which saw him strikeout a career-high seven batters in four innings against Bradley, February 20th.

Lefty Jacques Pucheu [14] will move into the Game 2 spot this weekend after seeing his previous start pushed back to Sunday due to weather. He held Northern Illinois to one run over four innings, striking out six, as the Govs won via run rule for his season’s first victory.

Southpaw Josh Rye [15] followed Pucheu in Sunday’s doubleheader, and tossed his own gem. He held the Huskies to one run over 5.1 innings and struck out four en route to his season’s first win.

The Governors bullpen held Vanderbilt to one run over the final 6.2 innings of Wednesday win. That outing lowered the bullpen ERA to 6.37 and it has 34 strikeouts in 29.2 innings (10.31 K/9).

Austin Peay and Indiana State have met regularly since 1988 with 44 previous meetings between the two programs.

The Sycamores own a 26-18 lead in the all-time series thanks to their 12-3 record against the Govs at Bob Warn Field.

Austin Peay last won in Terre Haute in 2007 when it won an 8-7 decision. Second baseman J.B. Gilbert drove in the winning run in the ninth. Matt Kole was the winning pitcher in relief and Ben Wilshire picked up the save.