Knoxville, TN – Redshirt senior Cheridene Green [1] posted a career-high 20 points, but it wasn’t enough to overcome a Vanderbilt team that shot 53.8 percent from the floor, handing the Tennessee Lady Vols a 76-69 loss at home on Thursday night.

In addition to Green, sophomore Rennia Davis [2] and freshman Mimi Collins [3] were also in double figures for Tennessee (17-11, 6-9 SEC) with 14 each. Collins’ total was a career high, while Davis posted her 21st double-figure scoring effort of the season. 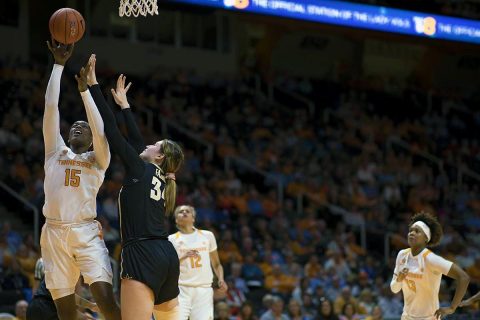 Vanderbilt (7-21, 2-13 SEC) was led by Mariella Fasoula, who finished the day with 19 points and a game-high nine rebounds. She was joined in double digits by Chelsie Hall with 14 and Cierra Walker with 16.

Even though Vanderbilt entered the game shooting 43.3 percent from the field for the season, the team hit at a 53.8 percent clip against Tennessee, including a 64.7 percent effort in the third quarter.

After going on a 6-0 run deep in the final quarter, the Commodores took control of the game and didn’t allow Tennessee to retake the lead after having five lead changes in the game. Vanderbilt also out-rebounded Tennessee 34-22 on the night, marking only the fifth time all season and second time in SEC play that an opponent has accomplished that feat.

The Lady Vols ended the first quarter with a 15-9 lead over Vanderbilt, connecting on 46.2 percent of their shots. Davis led the team with eight points and Collins scored three points in just two minutes of play. Tennessee also forced six turnovers in the opening frame.

During the second quarter, UT had a 10-point lead over Vanderbilt with eight minutes remaining in the half, but the home team went into halftime only up 27-25 after the Commodores outscored the Lady Vols, 14-6, over the final 7:36 of the second period.

Vanderbilt led by five points with 5:52 left in the third quarter, but some solid defense and a 6-0 run by Tennessee cut the Dores’ lead to only one, 47-46, to finish the third. The Lady Vols also shot 71.4 percent from the free throw line during the period, connecting on five of seven tries to aid a 7-for-18 effort from the floor.

The Lady Vols shot 60 percent from the field in the fourth quarter, with Cheridene Green [1] supplying seven points before fouling out with 3:29 to go. UT had pulled to within four points of Vanderbilt with 2:58 to go, but the Commodores went 11 of 13 from the charity stripe the rest of the way to hold on for the win.

Collins Contributing
With 14 points against Vandy, freshman Mimi Collins [3] logged her sixth double digit performance of the season and her fourth in SEC play.

Showing Out On Senior Night
Cheridene Green [1] led UT in scoring, posting a career-high 20 points and eight rebounds in front of a crowd 7,321 that included her mother who flew in from London to see the game. It was the first 20+ point performance of her career.

Up Next For Tennessee Lady Vols

The Tennessee Lady Vols will close out the regular season on the road, traveling to Oxford for a 3:00pm ET (2:00pm CT) tip against Ole Miss. The game will be available for streaming via SECN+.