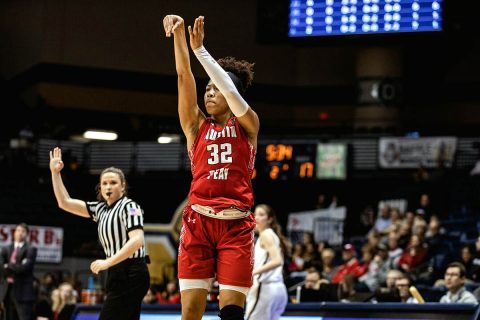 The Govs got the first points of the game, but the Racers promptly went on a 10-0 run to take control of the early portion of the game, with the Govs starting only one-of-nine from the field.

However, a 6-0 run in a minute of game time closed the gap to only two points, but the contest was truly a game of runs.

Murray closed the quarter on a 13-2 run led by Janika Griffith-Wallace’s nine first quarter points. Griffith-Wallace had 22 points against the Govs a couple weeks ago, as she showed no signs of slowing down.

The Govs found themselves down, 23-10, after the first period, despite six rebounds from Arielle Gonzalez-Varner [2].

Griffith-Wallace started out the second quarter by nailing a three-pointer, but was answered by a triple from Nieja Crawford [3]. The Racers then turned to the leading scorer and rebounder in the Ohio Valley Conference in Evelyn Adebayo. Adebayo had 12 points in the first half, along with five rebounds.

The Govs came out of the break with some energy, getting four points in the opening 39 seconds as they started to press more. Brianah Ferby [1] hit two triples in the opening five minutes of the quarter, cutting the lead down to nine, but the Racers were consistent in stopping any momentum the Govs had.

Lex Mayes was doing the damage in the third period, as she hit a couple of triples and free throws to put the Racers back ahead by 13. Ferby hit her third triple of the quarter with three minutes to go, but the Govs went scoreless the rest of the period and entered the fourth down 13, 62-49.

Maggie Knowles [4] made a big three-pointer to cut the deficit to nine at the start of the fourth and kept on creeping closer.

After a couple Murray State free throws with 3:30 to go in the game, the Govs went on a 6-0 run, highlighted by two straight buckets from Gonzalez-Varner. The Murray lead had evaporated into only a two-point advantage.

It stayed that way until Griffith-Wallace hit a one-handed off balance jumper to up the lead to four with 26 seconds to go. Keisha Gregory [6] hit a layup in the paint with 15 seconds left as the Govs fouled. Mayes only made one of two free throws, giving the Govs a chance to tie.

They tried to run a play for three-point specialist Gabby Gregory [7], but she was well defended and Brandi Ferby [8] got off a decent look, but it did not fall and the Racers held on for the win.

The Govs will be the No. 5 seed in the OVC Tournament, playing Tennessee Tech.

Arielle Gonzalez-Varner [2] had a double-double with 16 points and 11 boards.

The loss was only the second all season when the Govs had more free-throw attempts.

“I hope it (the comeback) gives us confidence. It gives me confidence, but we just have to get that attack mentality from when the ball is tipped. It seems like the pressure is off us when we are down and we go to the basket and just see what happens. We have played well all year when we have done that, so we have to do what we have done all year and try and get better day-by-day.”

Next Up For APSU

The Govs will enter next week’s OVC Tournament as the No. 5 seed and will play No. 4 seed Tennessee Tech, 1:00pm, Thursday, in Evansville, IN.