Nashville, TN -The Nashville Predators had an old fashioned street brawl tonight against some former teammates and the rest of the Minnesota Wild, but in the end, they stood victorious with the 5-4 win.

Former Predator Kevin Fiala, who was briefly honored during the first period of tonight’s game, quickly became the villain after scoring two goals on the night.  But the Smashville “love” quickly became boos when he got caught up in some fisticuffs with former teammate Filip Forsberg and Ryan Johansen. 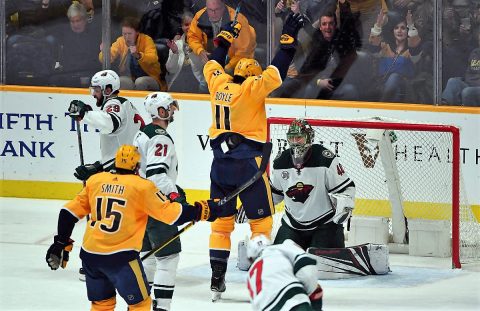 Nashville Predators center Brian Boyle (11) celebrates in front of Minnesota Wild goaltender Devan Dubnyk (40) after scoring a goal during the second period at Bridgestone Arena. The goal was originally credited to Nashville Predators defenseman P.K. Subban (76) but was changed by officials to Boyle in the third period. (Christopher Hanewinckel-USA TODAY Sports)

Nashville beat the Wild over the weekend in similar fashion, winning in a shootout, but the playoff implications are getting greater with each game so the intensity tonight was at a fever pitch.

Craig Smith quickly got the Predators on the board at 1:48 of the opening frame, catching a rebound in the slot and beating Devan Dubnyk in goal for the early 1-0 lead.

Then at 15:25 of the first period, Fiala found the net after gathering a turnover and beating Pekka Rinne with a blazing wrist shot over the shoulder, and the game was tied, 1-1.

In the second period, big man Brian Boyle, who had set up shop in front of the Minnesota net, deflected a P.K Subban shot into the net and Nashville took the lead, 2-1.

At 17:49 of the second period, another former Predator, Pontus Aberg fired a wrist shot past Rinne and the two teams were tied once again, 2-2.

Enter the third period and the temperature was getting hot.

At 2:22 of the final frame, Eric Fehr took a pass from Marcus Foligno and the one-timer beat Rinne and the Wild took a 3-2 lead.  Then just 34 seconds later, Nashville captain Roman Josi took the puck to the net, unassisted and slipped the puck through the five-hole of Dubnyk and the teams were tied once again, 3-3.

Viktor Arvidsson then scored his 28th goal of the season at 8:21 of the final frame on a snapshot that trickled into the net and Nashville regained the lead, 4-3.

But here comes that Fiala kid again, who was bound and determined to show his former team that they made a big mistake by trading him, and at 17:42 of the final period, he scored on the face-off to tie the game once again, 4-4.

After the score, Fiala and Filip Forsberg got into a shoving match that was separated by the officials, then as Fiala was leaving the ice, he shove Ryan Johansen for good measure.  The Bridgestone Arena crowd rained down the “BOOS” and just like that, Fiala was divorced from his former team.

No score during the overtime period as the Predators fought off a 4 on 3 power play to send it to a shootout.  In a case of Deja-Vu, Ryan Johansen scored the only tally of the shootout for the win.

The fans got their money’s worth in front of a national NBC audience, and with the win they take back the lead in the Central Division of the Western Conference.

Nashville will host the Carolina Hurricane on Saturday night, with puck drop at 7:00pm.