Nashville, TN – No. 8 Tennessee opens play in the SEC Tournament on Friday night in the quarterfinals against Mississippi State.

The game will tip at approximately 8:30pm CT and will be televised on SEC Network and can also be viewed online through WatchESPN. Fans can listen live on their local Vol Network affiliate to hear Bob Kesling [1] and Bert Bertelkamp describing the action.

Tennessee (27-4, 15-3 SEC) claimed the No. 3 seed in the tournament and earned a double bye. The Vols are one of the favorites to win the championship and have the opportunity to earn a top seed in the NCAA Tournament. 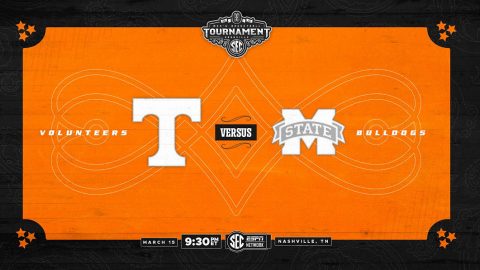 Earlier this week, Grant Williams [2] became just the 10th player in conference history to win SEC Player of the Year in back-to-back season and was the first since Arkansas’ Corliss Williamson did so in 1994 and 1995.

Williams was also tabbed first-team All-SEC after finishing the regular season as the top scorer in the SEC with 19.3 points per game. He has been one of the nation’s most versatile and reliable players this season, averaging 7.7 rebounds, 3.3 assists, 1.5 blocks and 1.2 steals per game.

Senior wing Admiral Schofield [3] earned first-team All-SEC recognition from the coaches after averaging 16.3 points per game, which ranked second on the team and fifth in the SEC, to go along with 6.3 rebounds and 2.0 assists.

Jordan Bone [4] rounded out the Vols’ All-SEC performers, earning a nod on the second team by both the coaches and the AP. The junior point guard led the SEC in assists per game (6.1), ranked second in assist/turnover ratio (3.0) and seventh in field-goal percentage (.475).

Tennessee won of its lone matchup against Mississippi State this season. UT bested the Bulldogs at home for Senior Night, 71-54, to cap a perfect 18-0 slate in Thompson-Boling Arena this year. MSU cruised past Texas A&M, 80-54, in the second round of the tournament to advance to the quarterfinals.

Tennessee is 1-0 against Mississippi State this season, posting a 71-54 win in Knoxville.

The Vols are 1-0 against Texas A&M this season, defeating the Aggies 93-76 in College Station.

Tennessee swept Vanderbilt this year, winning 88-83 in overtime in Nashville before posting a 58-46 victory in Knoxville.

Tennessee is 2-1 at neutral sites this season.

Give Tennessee 28 wins this season, tying for the second-most victories in program history.

Ben Howland’s squad was one of five teams in a battle for the four seed and a double bye in the SEC Tournament during the final week of the regular season. Mississippi State has a chance to compete for the championship and will be a tough test for the Vols in the quarterfinals.

Junior guard Lamar Peters leads MSU in assists (5.2 apg), steals (1.7 spg) and 3-pointers made (79) and is second on the team in scoring with 11.6 points per game. Peters, junior Tyson Carter (59) and Weatherspoon (53) are all capable of going off from beyond the arc on any given night. Carter (10.7 ppg, .455 FG%) dropped a season-high 22 points behind four threes against Missouri earlier this season.

The Vols own the third-best SEC Tournament winning percentage among league schools, trailing only Kentucky (.842) and Alabama (.559).

UT has reached the championship game 11 times (tied for third-most among league schools), most recently last season in St. Louis.

Tennessee has been the No. 3 seed only once previously, and the Vols fell to sixth-seeded Ole Miss, 81-72, in the 1981 tournament in Birmingham.

This is the 10th time Nashville has hosted the SEC Tournament. UT is 11-9 in the tournament when it takes place in “The Music City.”

Tennessee topped Kentucky, the third time UT beat the Wildcats that year, in the championship game of the 1979 SEC Tournament in Birmingham, Ala. The Vols prevailed 75-69 in overtime on March 3rd, 1979.

Grant Williams [2] has joined a prestigious group of players in SEC history by being named SEC Player of the Year in back-to-back seasons.

Williams, who also was named the SEC POY by the league coaches last year, is the first player to repeat since Arkansas’ Corliss Williamson in 1994 and 1995.

In total, only nine players have accomplished the achievement since the award was first started in 1965, including VFLs Bernard King and Dale Ellis and other all-time greats such as Williamson, Pete Maravich and Shaq.

Tennessee has now tied LSU for the most players by a team (3) to earn the achievement in back-to-back seasons in SEC history. See chart below.

And if Williams were to return next season, he would have a chance to join an even more exclusive and elite group of players during his senior campaign. King (1975-77) and Maravich (1968-70) are the only players to ever win the award in three consecutive seasons.

Junior Grant Williams [2] is the 16th player in Tennessee basketball history to earn first-team All-America honors—and just the second in the last 39 years.

The Vols had 14 first-team All-America selections between Bernie Mehen in 1940 and Dale Ellis in 1983. Since then, Chris Lofton (2008) was UT’s only first-teamer until Williams joined the club this year.

Senior wing Admiral Schofield [3] earned first-team All-SEC status from the league’s head coaches after landing on the second team a season ago.

Schofield’s scoring average has increased every year during his career, and he now averages 16.3 ppg to rank fifth among all SEC players. He also ranks fifth in the SEC in field-goal percentage (.476).


Barnes A Semifinalist For Naismith Coach Of The Year

For the second consecutive year, Rick Barnes [5] is one a semifinalist for the Werner Ladder Naismith Trophy for Men’s College Coach of the Year.

One year removed from leading Tennessee to the SEC Championship and a 26-9 overall record, Barnes this season has guided the Volunteers to a 27-4 mark. That impressive record includes a school-record 19-game winning streak and multiple victories over top-five opponents.

Four finalists will be announced on March 20th.