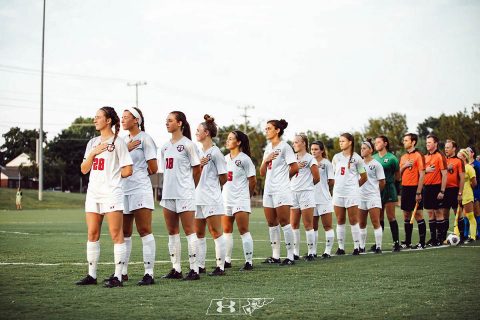 The Governors will have a lot of roster turnover, as they had a heavy senior class from a year before, but do return All-Ohio Valley Conference selections in Renee Semaan [1] and Claire Larose [2].

“It was a good first game, especially coming off Spring Break” said Governors head coach Naomi Kolarova [3]. “We did not create as many chances as we’d have liked, but we did not waste opportunities and possessed well for long periods of play, which we struggled to do so last year.”

The game started off with the two teams feeling each other out in the opening minutes, with the Govs looking to find an identity. Some players were thrust into a larger role, as is typical in the spring with coaches aiming to develop new ideas or to see how players respond with more gametime than they might have had last season.

Lipscomb, who won the Atlantic Sun Championship and upset Mississippi State in the opening round of the NCAA Tournament last year, started to carve out more space in the Govs’ half, but the Govs backline continued to deny the Bisons.

The Govs continued to limit the chances Lipscomb were getting, but the Bisons finally broke through in the 88th minute, a goal which proved to be the winner.

“We played well defensively as a team for the most part so I was fairly happy there,” said Kolarova. “Lipscomb’s movement in the final third broke us down a couple times, but we kept them working hard for any chance they did get. Overall, I thought it was a good way to start our spring season considering we faced a team that won a game in the NCAA Tourney.”