Greenbelt, MD – NASA scientists, engineers, and technologists are preparing for a new era of human exploration at the Moon, which includes a new launch system, capsule, and lunar-orbiting outpost that will serve as the jumping-off point for human spaceflight deeper into the Solar System.

NASA’s Goddard Space Flight Center in Greenbelt, Maryland, is playing a vital role in these initiatives, particularly in the areas of communications and instrument development as evidenced by the recent award of five proposals under NASA’s Development and Advancement of Lunar Instrumentation (DALI) [1] to advance spacecraft-based instrument for use in lunar-landing missions.

The technologies needed for sustainable exploration at the Moon will have to be powerful, multipurpose, and fast, said Jake Bleacher, Chief Scientist for the Human Exploration and Operations Mission Directorate. 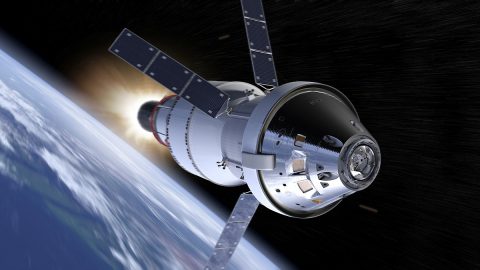 Goddard’s legacy role of providing communications between the ground and next-generation spacecraft will be the center’s most significant contribution to the exploration of the Moon and Mars [2] with NASA’s Space Launch System, Orion spacecraft, and the Gateway [3]. 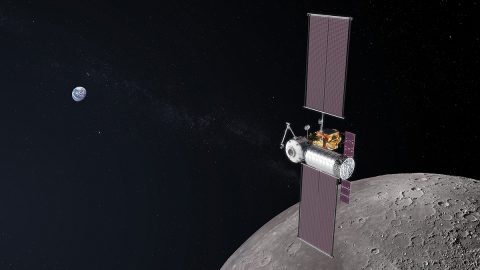 In this artist’s concept image, the Gateway is shown mid-assembly. The first logistics module carrying cargo and other goods is docked to the spaceship as it orbits the Moon. (NASA)

“Houston may have broadcast Neil Armstrong’s first words, but they had to first come through Goddard’s communications hub,” said Noah Petro, the project scientist on the Lunar Reconnaissance Orbiter, or LRO, which has thoroughly mapped the lunar surface — data that will inform future Moon landings.

Radio frequency (RF)-based systems have historically consisted of a vast network of ground antennas and land lines, and more recently NASA’s Tracking and Data Relay Satellites, or TDRS. These systems are giving way to optical or laser communications. Although radio-based systems will continue playing a role, laser communications will be able to support the demand for high-definition video and increased data loads.

To demonstrate an operational laser communications system, Goddard is expected to launch the Laser Communications Relay Demonstration, or LCRD, mission aboard a U.S. Air Force spacecraft that will operate 22,000 miles above Earth’s surface in geosynchronous orbit. Over the mission’s lifespan, LCRD will relay data encoded onto beams of infrared light, which is invisible to the human eye, between two Earth terminals in California and Hawaii. 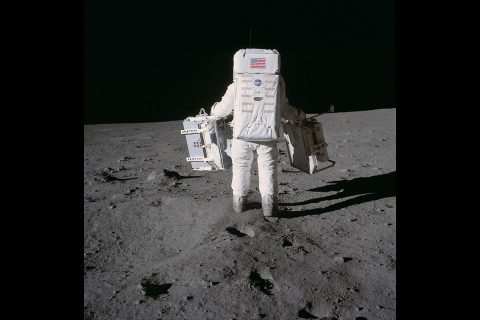 Apollo 11 Astronaut Buzz Aldrin moves toward a position to deploy two components of the Early Apollo Scientific Experiments Package, or EASEP, on the lunar surface. (NASA)

NASA will later fly crew aboard the Orion spacecraft to travel around the Moon and back with the Goddard-developed Optical to Orion Communications System [6], or O2O, to provide high-speed data and high-definition video streaming during the mission. After the initial flight, Goddard technologists expect to add more laser communications terminals on future exploration missions, including a terminal on Gateway.

Goddard’s role in human spaceflight is not limited to communications. During the Apollo era, the center developed several instrument packages, and that role will continue in the next era of lunar exploration.

NASA’s Gateway in orbit around the Moon will be an outpost to explore the lunar surface, conduct experiments, and prepare for spaceflights to more distant destinations, and instruments that can be used for multiple purposes will be important to optimizing potential science and exploration.

“Our job is to think of other ways that a science instrument could be used,” Bleacher said.

An example of this multipurpose philosophy is the Goddard-developed Neutron star Interior Composition Explorer, or NICER [8], as well as a multifunctional sensor platform [9] now under development, Bleacher said.

NICER is designed primarily to study neutron stars, but it also carries built-in software that uses timing data from pulsing neutron stars to stitch together autonomous navigational solutions, similar to how the Global Positioning System, widely known as GPS, provides positioning, navigation, and timing services to users on Earth. 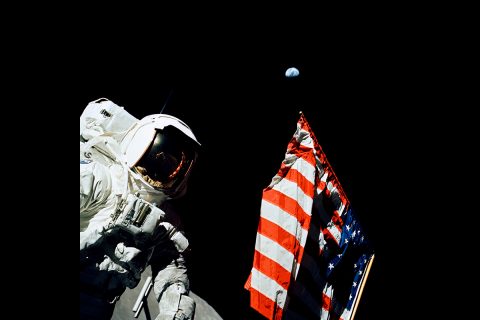 Geologist-Astronaut Harrison Schmitt, Apollo 17 Lunar Module pilot, is photographed next to the American Flag during NASA’s final lunar landing mission in the Apollo series — a mission that included an instrument developed by Goddard scientist Otto Berg. The photo was taken at the Taurus-Littrow landing site. The highest part of the flag appears to point toward planet Earth in the distant background. (NASA)

This technology, demonstrated in an experiment called Station Explorer for X-ray Timing and Navigation Technology, or SEXTANT [10], provides a new option for deep space navigation that could work in concert with existing spacecraft-based radio and optical systems.

This year, NICER Principal Investigator Keith Gendreau and his team are expected to showcase yet another potentially groundbreaking technology with the NICER payload — X-ray communications, or XCOM [11], in space. Although very early in its development, XCOM could usher in the next generation of communications technologies.

“NICER is the model we want to apply to everything,” Bleacher said. “My goal is to maximize the time of use for any technology we develop. It’s a multipurpose tool and finding all the ways we can use it is where exploration gets interesting.”

NASA is going to the Moon and on to Mars, in a measured, sustainable way.

The direction from Space Policy Directive-1 [13] builds on the hard work NASA is doing on its SLS and Orion spacecraft, agency efforts to enable commercial partners, its work with international partners at the International Space Station in low-Earth orbit, and what NASA learns from its current robotic missions at the Moon and Mars [14].