Nashville, TN – For the second year in a row, the No. 8 Tennessee Vols has advanced to the SEC Tournament Championship Game. The Vols will take on No. 22 Auburn at 12:00pm CT at Bridgestone Arena.

The game will be televised on ESPN and can also be viewed online through WatchESPN. Fans can listen live on their local Vol Network affiliate to hear Bob Kesling and Bert Bertelkamp describing the action. 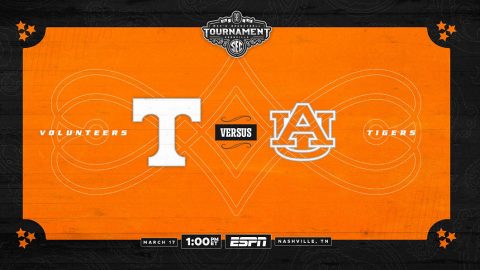 The Vols were one of the favorites to win the championship entering the weekend and have the opportunity to earn a top seed in the NCAA Tournament.

The Big Orange rallied from down eight points in the final three minutes to defeat No. 4 Kentucky, 82-78, in the semifinals. UT defeated Mississippi State, 83-76, in the quarterfinals.

Earlier this week, Grant Williams became just the 10th player in conference history to win SEC Player of the Year in back-to-back season and was the first since Arkansas’ Corliss Williamson did so in 1994 and 1995. Williams was also tabbed first-team All-SEC after finishing the regular season as the top scorer in the SEC with 19.3 points per game. He has been one of the nation’s most versatile and reliable players this season, averaging 7.7 rebounds, 3.3 assists, 1.5 blocks and 1.2 steals per game.

Auburn won the lone matchup between the two teams, 84-80, just one week ago. The Tigers are the No. 5 seed in the tournament and advanced to the championship game with wins over Missouri in the second round, South Carolina in the quarterfinals and Florida in the semifinals.

The Vols have a 9-3 edge when the teams meet in the SEC Tournament and have won each of the last two meetings.

Auburn and Tennessee have never met in the SEC Tournament championship game.

Give Tennessee 30 wins for just the second time in program history.

Give Rick Barnes his third 30-win season as a head coach.

Make the Vols 4-3 against ranked opponents this season.

This year’s Vols have posted three wins over teams ranked in the AP top five. That ties the 1976-77 squad for the most wins over top-five opponents in a single season.

Two of Tennessee’s four losses this season have come in overtime, and all four were away from home against opponents who are currently ranked in the AP Top 25.

Narrowly missing a top-four seed and a double-bye, Auburn (25-9, 11-7 SEC) is one of the hottest teams in the country, winning nine of its last 10 games. The Tigers are competing in the SEC Tournament Championship Game for the first time since 2000.

Another player to keep an eye on is sophomore Chuma Okeke. The 6-8 forward is averaging 11.6 points, 6.6 rebounds, 1.9 assists, 1.7 steals and 1.2 blocks per game. He has the ability to score at all three levels and is third on the team in 3-pointers, with 43. He had 22 points in the first game against the Vols on March 9th.

The Vols own the second-best SEC Tournament winning percentage among league schools, trailing only Kentucky (.838) and Alabama (.558).

Tennessee has been the No. 3 seed only once previously, and the Vols fell to sixth-seeded Ole Miss, 81-72, in the 1981 tournament in Birmingham.

This is the 10th time Nashville has hosted the SEC Tournament. UT is 13-9 in the tournament when it takes place in “The Music City.”

Tennessee’s 1.68 assist/turnover ratio would stand as a single-season program record.

The Vols’ 82.3 points per game would rank fourth all-time in program history.

Grant Williams has broken Tennessee’s single-season record for free throws made by a junior. Williams has 204. Allan Houston previously held the record with 189 as a junior in 1991-92.

Tennessee has recorded 29 wins for the second time in program history. This also is the first time the Vols have won at least 25 games in back-to-back seasons.

Dating to the start of last season, Tennessee has won 24 total games away from home.