These “First Strike” Soldiers made up the majority of Task Force Talon, who deployed to northern Cameroon from October 2018 through March 2019. During their deployment, the task force conducted security and infrastructure missions at Contingency Location Garoua, Cameroon, in order to provide force protection and enhance United States government strategic relationships, access and influence in the area. 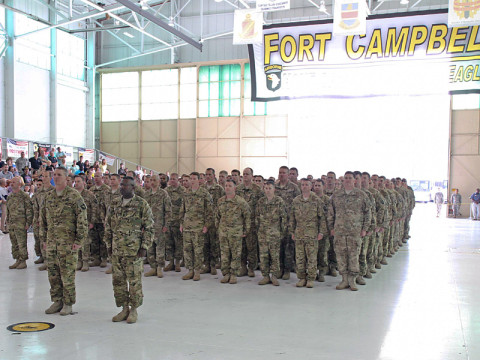 Soldiers assigned to the 3rd Brigade Combat Team “Rakkasans,” and 101st Combat Aviation Brigade, 101st Airborne Division (Air Assault), are greeted by family members during their welcome home ceremony, May 20th, 2013, at Fort Campbell, Ky. The Soldiers returned home after a nine-month deployment to Afghanistan in support of Operation Enduring Freedom, where they advised and assisted the Afghan National Security Forces to better enable them to take a lead role for their country in the future.

The task force also worked with the U.S. State Department, the Cameroonian Armed Forces, non-government organizations and host nation partners to expand positive relationships and enable security in the region.

Flight times are subject to change.