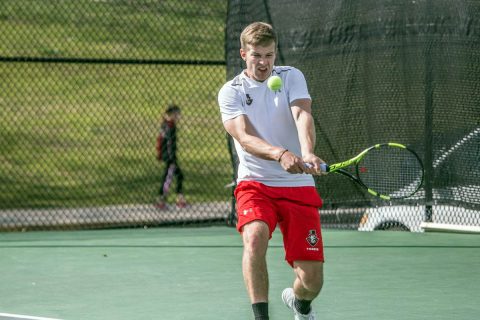 The Governors (4-10) have performed well as of late, especially at home. The Govs blanked Martin Methodist in their last match and now possess a 4-4 record at home.

Jacob Lorino [1] and Chad Woodham [2] are on a two-match win streak in doubles, including a win over a Butler team.

In singles, Almantas Ozelis [3] leads the Govs with a 7-6 record this spring, all at the No. 1 position. He won a dramatic three-set match against Martin Methodist’s No. 1 player. Hunter Sanders [4] also has a 5-5 dual record and been another bright spot after sitting out last year due to NCAA transfer rules.

The Tigers (5-5) have beaten Mississippi Valley State for four of their five wins. It is either one extreme or the other for the Tigers, winning and losing all of their matches by shutouts.

The Tigers defeated the Govs last season, 4-3, but the match result was suspended by the OVC. In the match, Ozelis and Christian Edison [5] won in singles, while Woodham also picked up a doubles win with Timo Kiesslich [6].

Make sure to follow @AustinPeayMTN for all the latest news and updates.