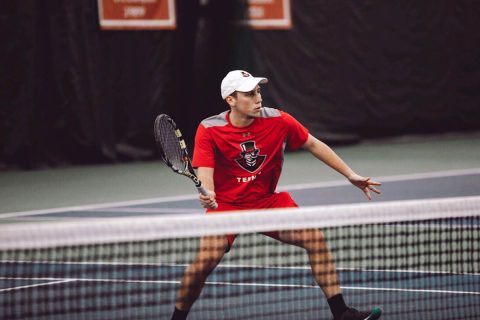 The Governors (5-10, 1-0 OVC) played what could be their most complete match of the season, despite missing Anton Damberg [1] due to illness.

As a result, Hunter Sanders [2] moved to replace him at No. 1 doubles with Almantas Ozelis [3] and Chad Woodham [4] moved up into the singles lineup.

The Govs got off to a good start, winning at No. 2 doubles thanks to the pair of Timo Kiesslich [5] and Christian Edison [6]. However, the Tigers (5-6, 0-1 OVC) answered back with a win at No. 1 doubles. It was Ozelis’s first OVC doubles loss in his career, being 15-0 in previous completed doubles matches in OVC play.

However, the doubles point was won by the Govs thanks to the surging tandem of Woodham and Jacob Lorino [7]. The pair won at No. 3 doubles, 6-4, to clinch the point. It was their third straight doubles victory after wins over Butler and Martin Methodist.

In singles, the Govs simply ran over the Tigers. The Govs won all six singles matches in straight sets, with Edison, Ozelis, and Lorino winning the first three matches to give the Govs an insurmountable 4-0 lead.

The Govs capped off their OVC win with three more straight-set wins from Kiesslich, Sanders, and Woodham.

“Winning the doubles point has always put us in a good position for singles,” said Governors assistant coach Maria Sorbello [8]. “Our men worked hard today and earned the result.”

The men return to action with a makeup, non-conference road match against North Alabama, 1:00pm, Tuesday.