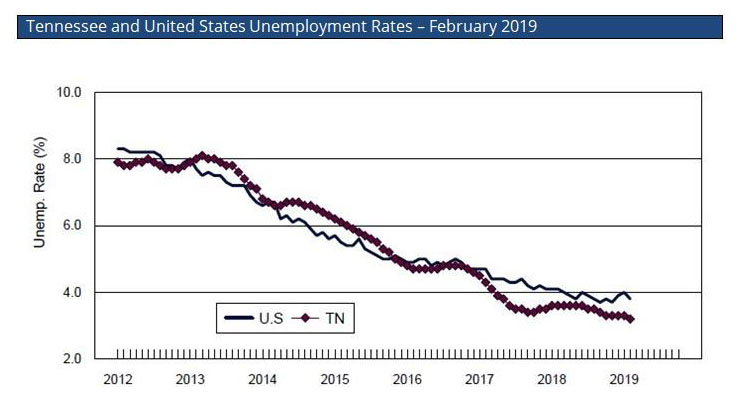 Nashville, TN – The statewide unemployment rate in Tennessee dropped to a new historic low in February according to data released Thursday by the Tennessee Department of Labor and Workforce Development (TDLWD). The seasonally adjusted rate of 3.2 percent is 0.1 of a percentage point lower than the previous historic low. 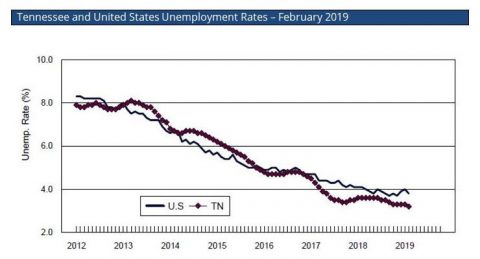 Tennessee reached its previous record low unemployment rate of 3.3 percent in October 2018 and it remained at the level for four consecutive months. The state began tracking unemployment rates in 1976.

Over the past year, Tennessee’s February unemployment rate decreased from 3.6 percent of 3.2 percent.

While Tennessee did see record-breaking unemployment in February, there was a decrease in the number of jobs across the state. Total nonfarm employment was down by 1,500 jobs between January and February. The state experienced the biggest decreases in the mining/logging/construction sector, followed by the professional/business services sector.

In a year to year comparison, Tennessee employers created an estimated 53,000 new jobs. The sector with the largest increase was leisure and hospitality, followed by trade/transportation/utilities and manufacturing.

The statewide and national unemployment rates are seasonally adjusted to eliminate the influences of weather, holidays, the opening and closing of schools, and other recurring seasonal events from an economic time series.

The state of Tennessee has produced a detailed analysis of the unemployment rate and job situation across the state. You can access that information here.

Tennessee’s workforce development website provides over 150,000 current job openings which you can apply for online, resume writing assistance, along with other job search assistance without any cost to Tennesseeans.