Clarksville, TN – Fruits and vegetables don’t typically express emotion – there’s no such thing as a happy apple or sad tomato – but on April 10th, 2019 visitors to the Austin Peay State University (APSU) Woodward Library might spot an angry cluster of grapes, wearing a 1930s-era fedora, near the popular reading section. 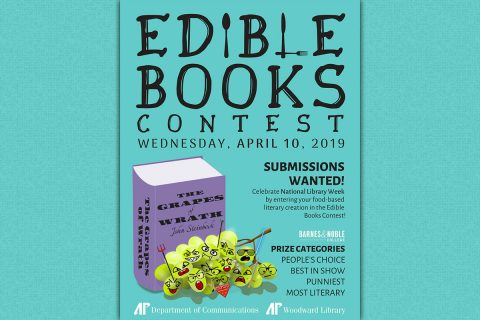 “It’s a reference to ‘The Grapes of Wrath,’” Katie Pendleton, APSU library communication and outreach specialist, said in reference to the John Steinbeck classic.

Other literary-themed foods will be on display that day as the library and the APSU Department of Communication host the University’s inaugural Edible Books Contest. The rules are simple – create a dish that somehow references a book, whether it’s the title, a character or a situation.

“People have been really creative,” Pendleton said. “You just need to tie it in so people will understand it.”

Austin Peay’s event, which is open to faculty, staff and students, coincides with National Library Week, April 7th-13th, and judges will award prizes in several categories, including best in show, people’s choice, punniest and most literary.

“It doesn’t have to taste good because it won’t be judged on taste,” Pendleton said. Then she paused. “But it wouldn’t hurt. People will be invited to eat when the judging is over.”

Entries should be dropped off that morning, April 10th, at the Woodward Library, and the winners will be announced around 1:00pm.

For information on how to participate, contact Pendleton at [1]