Louisville, KY – With a bid for the Elite Eight at stake, the No. 2-seeded Tennessee Vols are prepared to face No. 3 seed Purdue in the Sweet Sixteen of the NCAA Tournament at KFC Yum! Center in the South Region on Thursday. The game tips at 6:29pm CT and will be televised live on TBS.

Tennessee is competing in its eighth Sweet Sixteen all time and sixth since 2000. The Vols are 31-5 this season. That impressive record also includes a school-record 19-game winning streak, a program-record-tying three victories over top-five opponents and ties the most victories in a single season in program history. 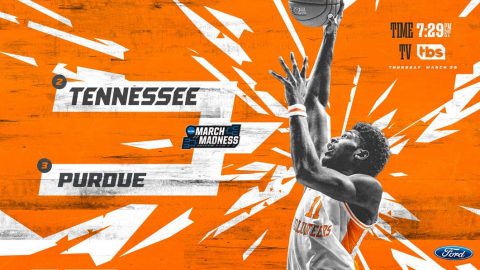 UT spent four weeks atop the Associated Press Top 25 rankings, and for the first time in program history, UT spent the entire season ranked among the top 10.

The Vols advanced to the second weekend with wins over Colgate and Iowa. Tennessee moved past the Raiders, 77-70, in the first round after All-SEC wing Admiral Schofield [1] knocked down three 3-pointers in the finals minutes.

Against the Hawkeyes, UT built a 21-point lead at halftime, but Iowa stormed back in the second half to tie things up at the end of regulation. National Player of the Year candidate Grant Williams [2] took over the game in overtime.

The two-time SEC Player of the Year finished with 19 points, seven rebounds, five assists, four steals and three blocks to fuel UT on both ends of the floor. His four steals matched the Tennessee record for steals in an NCAA Tournament game.

Stand as Tennessee’s 32nd victory of the season. That would set a program record for wins. It would also mark the most wins in a season by a Rick Barnes [3]‘ coached team.

Give the Volunteers a winning all-time record in NCAA Tournament play (23-22).

No player on Tennessee’s roster has ever previously reached the Sweet Sixteen.

This marks UT’s first-ever NCAA Tournament appearance in the state of Kentucky.

Possible Elite Eight opponents for Tennessee are Virginia and Oregon. That game would take place Saturday.

Tennessee owns a 4-8 all-time record vs. Virginia. The most recent meeting came in 2013. The teams split two previous clashes in the NCAA Tournament (1981 and 2007).

About the Purdue Boilermakers

Head Coach Matt Painter’s 12 NCAA Tournament appearances are the most nationally for a coach under the age of 55. He is 48 years old. He has also led Purdue to four straight 25-win seasons and a top-15 finish in each of the last four year-end AP polls.

All-American Carsen Edwards is one of the most explosive players in the country, averaging 23.6 points, 3.6 rebounds, 3.0 assists and 1.4 steals per game while shooting 35 percent from beyond the arc. Against Villanova in the second round, he poured in a career-high 42 points, which marked the second-most points by a Purdue and Big Ten player in NCAA Tournament history.

The All-Big Ten performer is one of two primary threats from deep for the Boilermakers. Edwards has knocked down 120 3-pointers this season while Ryan Cline has connected on 102 long balls.

The two are just the second and third players in school history to eclipse the 100 3-pointer mark. Cline leads Purdue in assists (3.4 apg) and is second in scoring (11.7 ppg).

Sophomore Matt Haarms became the first player to lead the Big Ten in field-goal percentage (.636 FG%) and blocks (2.0 bpg) since Ohio State’s Greg Oden in 2007. The 7-3 center is also averaging 9.4 points and 5.4 rebounds per game.

A pair of late rallies lifted Tennessee to a 78-75, overtime victory over No. 18 Purdue in the opening game of the Battle 4 Atlantis on November 22nd, 2017.

The Vols got 22 points from sophomore Grant Williams [2]—all of which came after halftime—while junior Kyle Alexander [6] turned in his first career double-double with 13 points and 11 rebounds. Lamonté Turner (17 points) and Admiral Schofield [1] (10) also finished in double figures.

Trailing 73-68 with 2:45 remaining in overtime, Tennessee used a 10-2 run over the final minutes to clinch its first win over a top-25 non-conference opponent since December 14th, 2014, when UT defeated No. 15 Butler.

After back-to-back buckets by Williams to draw the Vols within one, Purdue turned the ball over, giving UT possession with 1:04 left. Tennessee got the ball in and found Williams near the top of the key. He worked his way down low and—following a double team by the Boilermakers—passed off to Alexander in the paint for a wide-open dunk to take the lead.

A basket from Purdue’s Isaac Haas put the Boilermakers back in front, but Williams responded with another score with 14 seconds left to put the Vols up for good.

Purdue got a final look with under 10 seconds remaining, but the shot bounced off the rim and was corralled by Schofield. James Daniel III [7] then went to the foul line and added two free throws to seal the victory.

Despite Purdue having two seven-footers, the Vols out-rebounded the Boilermakers, 50-41.

The Vols made their deepest tournament run in 2010, when they beat San Diego State (Kawhi Leonard), Ohio and Ohio State (Evan Turner) to advance to the Elite Eight, where they fell to Michigan State (Draymond Green).

One year removed from leading Tennessee to the SEC Championship and a 26-9 overall record, Barnes this season has guided the Volunteers to a 31-5 mark. That impressive record includes a school-record 19-game winning streak and three victories over top-five opponents.