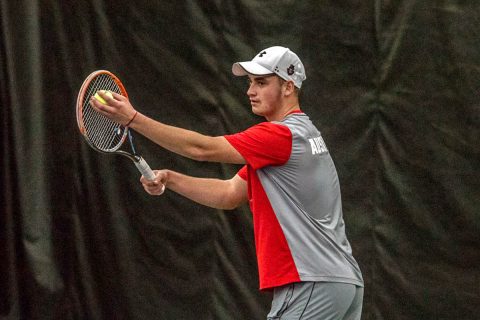 Against the Tigers, the Govs rolled to a 7-0 victory, winning every match but No. 1 doubles. The match against the Lions went a little differently, however. Despite winning the doubles point for the third consecutive match, the Lions controlled the singles portion of the match to win. Chad Woodham [1] picked up a three-set win in doubles for the Govs.

For his performance against Tennessee State, Christian Edison [2] was named OVC Player of the Week. The sophomore won at No. 2 doubles with Timo Kiesslich [3], before winning 6-1, 6-1 at No. 2 singles. The singles victory was the second-largest margin of victory from a Govs player this season. The award was also the first weekly award from the conference in Edison’s career.

The Gamecocks (8-4, 1-0 OVC) started the season on an absolute tear, winning their first seven matches, albeit against weaker opposition. From there, the Gamecocks faced a little tougher opposition and lost their next four matches, including road defeats to Chattanooga and Kennesaw State, whom the Govs also lost to this season. However, the Gamecocks rebounded last weekend with a 6-1 road win against Eastern Illinois in their conference opener.