Both pitchers were dominate, as Rackel retired 13 straight batters after giving up a first-inning run in Game 1, while Gross retied 14 straight after giving up her lone run in the first inning. 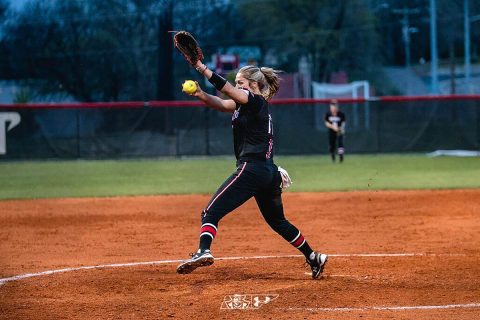 Austin Peay (20-14, 5-1 OVC) would see Tennessee State get out to a quick 1-0 lead in the top of the first inning on a Sarah Snell home run but answered right back in the bottom of the inning by scoring two runs on an RBI single by Danielle Liermann [3] and a bases-loaded walk to Lexi Osowski [4].

That would be all the runs that Rackel (13-5) would need, as she didn’t allow another baserunner to the Tigers until the top of the fifth inning — on a two-out walk — while finishing with nine strikeouts.

The Govs extended their lead to 5-1 in the second inning on Liermann’s 13th home run of the season – a three-run shot to center field – while adding two more runs in third inning on an RBI double by Kacy Acree [5] and a single by Rackel to make it 7-1.

Austin Peay closed out the games scoring with two final runs in the fifth inning, including one on an RBI single by Acree.

Just like the day’s opening game, the Tigers would jump out to a quick 1-0 lead on a first-inning home run by Snell, but get shutdown after that, this time versus Gross (3-1), who only allowed TSU to collect two hits in the contest, while finishing with five strikeouts.

Austin Peay has now won at least 20 games in back-to-back seasons for the first time since the 2006-2007 seasons.

Morgan Rackel [1] and Kacy Acree [5] extended their current hitting streaks to 11 straight games, tying for the seventh-longest by any Gov since the 2000 season.

Kacy Acree’s [5] current 11-game hit streak is the fifth hitting streak of her career of at least 11 straight games. No other Govs player have had a hit streak of 10-or-more games more than once in their careers since 2000.

The two victories versus Tennessee State, the current Govs senior class now has 85 career victories, moving them into fourth-place all-time for career wins by a senior class.

Natalie Schilling [9] became the third player in program history to record at least 50 stolen bases in a career with a stolen base in the third inning of Game 1.