Spartanburg, SC – A long day at the Country Club of Spartanburg ended with the Austin Peay State University (APSU) men’s golf team in second and a trio of Governors lurking near the head of the field at the Wofford Invitational, which kicked off Monday. 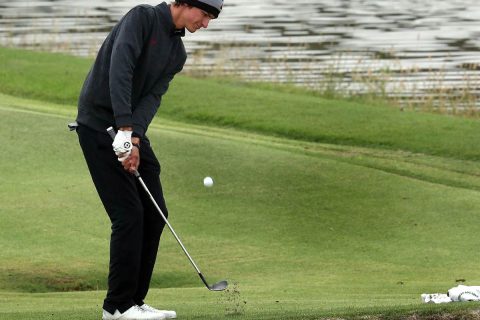 The Govs did an admirable job getting up and down for most of the day, posting 110 pars—second-most behind Radford.

Hovering near the top of the leaderboard is sophomore Chase Korte [1], whose seven-under 137 has him two shots off the pace, tied for third. At 69-68, it marks the second time this season Korte has posted two rounds in the 60s in the same tournament, and the first time since Michael Busse [2] at the Hummingbird Invitational back in October—the same tournament Korte was in the 60s twice. Over two rounds, Korte sank a dozen birdies, second-most in the tournament.

At 149, Busse turned in workmanlike rounds of 74-75 for the Govs; he parred 15 of 18 holes in round two, with only a trio of bogeys blemishing his second tour of the course. Garrett Whitfield [5] (75-79—154) endured a rough six-hole stretch in round two featuring four bogeys and a double on Hole Nos. 4-9; take away those holes and he was one-over in the second round and two-over in the tournament, especially thanks to a team-high 25 pars.

After playing as a five-man unit over the first 36 holes, the Govs will split off into foursomes for the final round, scheduled for a 9:00am (ET) start, Tuesday. The Govs will be paired with Furman, Wofford and Gardner-Webb and will go off the first three holes.