Clarksville, TN – Coming off a perfect 4-0 homestand this past weekend, the Austin Peay State University (APSU) softball team will head south two face two teams that made the NCAA postseason in 2018, in North Alabama and Jacksonville State. 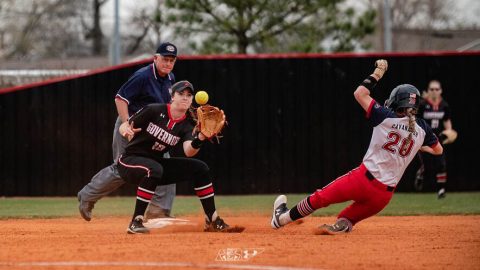 The Govs (20-14, 5-1 OVC) open play, 4:00pm, on Thursday with a single contest versus North Alabama, at Hilda B. Anderson Stadium in  Florence, AL, while Friday’s doubleheader versus Jacksonville State at University Field in Jacksonville, AL, is scheduled to begin at 1:00pm.

Heading into its swing through Alabama, the Govs offense is led by senior Danielle Liermann [1], who is hitting at a .345 clip, with five doubles, 13 home runs and 28 RBIs.

In the circle, Rackel has been the workhorse of the Govs staff posting a 14-5 overall record with a 2.24 ERA in 118.2 innings of work, while striking out an Ohio Valley Conference-high 138 batters this season.

About the North Alabama Lions

The Lions (17-11, 3-3 ASUN) and the Govs have already met once this year, back on March 10 at Cathi Maynard Park, with the two teams splitting a doubleheader, with Austin Peay taking Game 1 by a 9-1 final before UNA came away with the Game 2 win, 4-0.

North Alabama is led offensively by Veronica Westfall (.388, 0 HR, 11 RBI), followed by Lexie Harper, Meleah Hargett and Harley Stokes who are all batting over .290 this season.

In the circle, the Lions pitching staff is led by Megan Garst who has posted a 9-3 record this season, with a 0.89 ERA and 105 strikeouts in 79 innings pitched.

In the circle, Faith Sims has been almost unbeatable this season for the Gamecocks posting a 15-1 record, with a 1.54 ERA and 115 strikeouts in 109.1 innings pitched.

The Govs four-year seniors need one win to move into a tie for third place all-time for most wins by a senior class in program history (86).

Govs are three home runs away from tying program’s single-season record for home runs in a season by a team (51).

Morgan Rackel [8] is one win away from tying Morgan Brewer (2010-13) for fourth-place all-time in career wins by an Austin Peay pitcher (37).

Kacy Acree [4] is one double away from becoming the second Governor in program history to reach 40 doubles in a career.