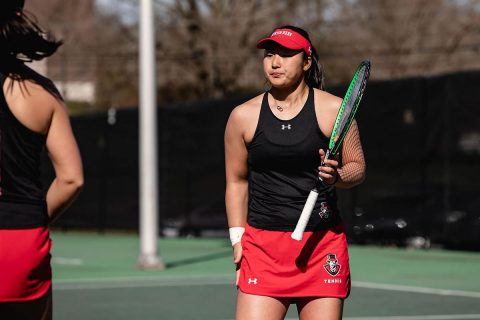 The Governors (14-0, 2-0 OVC) remained unbeaten after throttling one of the Ohio Valley Conference’s better teams in Jacksonville State, who came in with only two losses, last weekend.

The Govs won their 10th match via shutout and their ninth match without dropping a set.

Two Governors have win streaks that have reached double digits in singles. Claudia Yanes Garcia [1] has won her last 14 matches in singles dating back to last fall and is a perfect 13-0 this spring. Yanes Garcia has played at the No. 1 position recently due to her good performances and has also won her last five doubles matches.

The 13 dual singles matches in a row is fifth all-time in Governors history, only trailing Caroline Weikard (14), her sister Lidia Yanes Garcia [2] (16), and former standout Vanja Tomic, who had streaks of 17 and 20. Helena Kuppig [3] also rides a 10-match win streak into the weekend and is 11-1 overall in singles this spring.

The newcomer duo of Tatiana Lopez [4] and Honoka Nakanishi [5] is also on the brink of history. Lopez, a junior transfer, and Nakanishi, a freshman, have combined to win nine straight doubles matches, which is already the program record for one pairing. Weikard also won nine doubles matches in a row in 2010, but had two different partners.

The first opponent for the Govs, Southeast Missouri, has had a solid season to this point. The Redhawks (8-6, 1-1 OVC) have beaten teams such as Creighton, Bradley, and Louisiana Tech. The Redhawks got off to a solid start in OVC play, defeating UT Martin, 5-2, but lost to Belmont, 4-3, in their most recent outing.

The Govs have won four of the last six meetings against the Redhawks, but have not beaten them at home since the 2012-13 season. Last season the Govs came away with a narrow 4-3 victory on the road. Kuppig, Lidia Yanes Garcia [2], and Fabienne Schmidt [6] all won singles matches for the Govs before Brittney Covington [7] clinched the match with a win at No. 6 singles.

The Govs face a quick turnaround after the SEMO match, taking on UT Martin less than 24 hours later. The Skyhawks (3-8, 1-2 OVC) have faced stern competition in the non-conference slate, going up against Tennessee, Alabama, Samford, and Middle Tennessee on the road, losing all four. The Skyhawks defeated Tennessee State, 6-1, to earn their first OVC win of the year.

The Govs are 3-4 against the Skyhawks in the past seven meetings, but won both matches last year. The Govs only lost one out of 10 completed singles matches in the two matches, but lost the doubles point both times to the Skyhawks.