Clarksville, TN – Sergeant Terry Minton, was looking very dapper as he retired, with an effective date of April 30th, 2019, from the Clarksville Police Department after 32 years in law enforcement.

Terry started with Clarksville Police Department, August 21st, 1986. He held many positions during his career. He started in patrol and was selected in 1996 to be a Field Training Officer, helping to mold the minds of new officers. 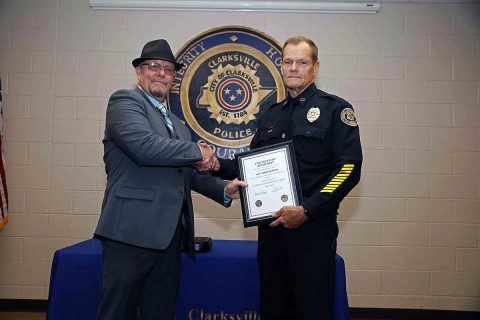 As he expanded his horizons, he became a Crisis Negotiator in 1997 and stayed until June 2001.

Terry was promoted to the rank of Sergeant November 1st, 1988.

In 2002, he took on the role as Field Training Officer Assistance Coordinator. He continued to gain expertise and hone his law enforcement skills and was selected to be on the Crime Scene Team in 2011 and became the Commander in 2012 and held the position until April 2019. Also, Sergeant Minton last assignment with the police department was being in charge of the evidence room. He made numerous improvements and renovations, thereby, ensuring better accountability for thousands of items linked to criminal cases.

Sergeant Terry Minton’s retirement will leave a void in the police department and he will be missed. But, all in attendance were happy for Terry and wished him well on his retirement and the best for his future endeavors.