Muscle Shoals, AL – From the first tee to the final putt, it was a day for exorcising some demons and establishing new benchmarks for the Austin Peay State University (APSU) women’s golf team, which closed out the 2019 Ohio Valley Conference Women’s Golf Championship on a high note, Wednesday. 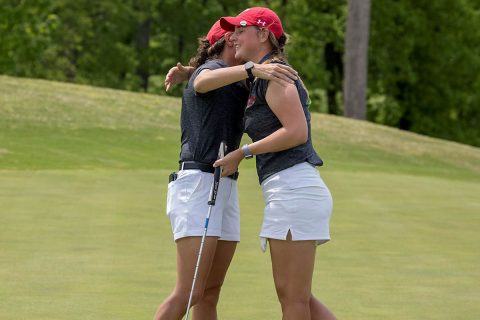 The Govs shot an even 300 in the final round, besting their previous 18-hole record at the Championship by one shot.

Murray State reprised its role as team champion, its third consecutive team title, posting an 864, with Eastern Kentucky (884), Jacksonville State (887) and Belmont (895) rounding out the top-five.

There was a sense that the day was ripe for an outstanding move for the Govs right from the opening hole. After a double-bogey on the first day and a triple yesterday to open her round, junior Meghann Stamps [1] birdied her nemesis to get out to an outstanding start.

After struggling with a double and a bogey to open the back-nine, Taylor Goodley [3] got two strokes back with back-to-back birdies, while Reagan Greene [4] moved to one-under on the tournament with birdie efforts on 12 and 13, including a near-miss eagle attempt on No. 12.

Once again the Govs were led by Greene, who became the first player since Jessica Cathey [5] (2013-14) to post back-to-back top-10 finishes at the OVC Championships.

For the tournament, she averaged 3.00 strokes per hole on par-3 attempts and 5.00 strokes on par-5 offerings, making her one of four players to average par or better with the iron game and with the driver.

In her first OVC Championship appearance, freshman sensation and All-OVC performer Taylor Dedmen [6] tied for 17th (76-76-75—227), the best finish by an Austin Peay freshman since Cathey in 2013.

She tied Greene with a team-high 36 pars and had possibly the best individual hole of the tournament, posting a birdie on the 178-yard par-3 at No. 6, one three birdies on that hole during the entire tournament.

“I’ll always be grateful for these seniors and what they’ve meant to this program,” said head coach Amy McCollum [7]. “Ashton, Taylor and Reagan have been so consistent, not only as competitors but as leaders and I know they’ll go far in whatever they do in life. For our returners, I hope they take what they learned this week and use it to get better for next year; I thought we did a lot of good things today to build on, and they (Stamps and Dedmen) are a big part of our future.”

This tournament concludes the careers of Greene and both Goodley’s, who have been vital members of the program and will be sorely missed.

Fortunately the cupboard is not bare for McCollum, who returns Dedmen, Stamps, Riley Cooper [8], Shelby Darnell [9] and Andrea Presilla [10] as a core lineup to build on heading into 2019-20.