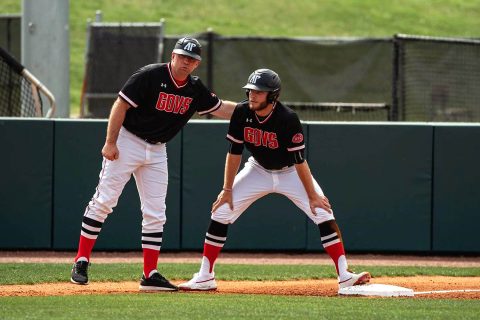 Due to inclement weather, the three-game series is scheduled to begin with a 4:00pm, Friday contest.

The Govs and Skyhawks will follow that game with a 2:00pm, Saturday doubleheader. Easter Sunday would be used as a possible makeup day, if necessary to complete the three-game set.

Austin Peay had a flair for the dramatic during its recently-completed homestand, twice winning in walk-off fashion. The Govs won Game 2 of its series against Morehead State, last Friday, in the 11th inning. Austin Peay followed that with Matt Joslin [1]‘s walk-off grand slam to turn aside Southern Illinois, Tuesday.

The Govs return to the road where they have battled mixed results in 2019, posting a 6-9 record. Austin Peay has won just one of its three OVC road series so far this season, winning a pair of games at Southeast Missouri.

UT Martin owns a 5-4 home record this season and has split its first two home OVC sets. The Skyhawks were swept by UT Martin in mid-March before winning their series against Morehead State to end March.

Left-hander Josh Rye [2] will get the nod in Friday afternoon’s start. It will be his sixth consecutive Friday start and he is 3-1 with a 1.82 ERA since moving into the role, posting 29 strikeouts in 29.2 innings pitched.

Right-hander Brandon Vial [4] gets the nod to close the series for a seventh consecutive league weekend. He is 3-2 with a 3.00 ERA in his six OVC starts in 2019.

The Govs weekend rotation above has combined to post a 2.85 ERA and a 10-5 record in 18 starts in league action. They have 103 strikeouts in 101 innings worked and opponents are hitting just .235 against them.

Fifteen different Governors have started a game in the season’s first 35 games. Only two players have started every game in 2019: center fielder Garrett Spain [5] and utility man Parker Phillips [6].

Freshman designated hitter Matt Joslin [1] continues to be the right man in the right spot in 2019. He is batting .750 with 12 RBI in bases-loaded situations this season, including Tuesday’s walk-off grand slam against SIU.

Senior Aaron Campbell [9] has started the last four games in left field. He led the Govs with a .500 batting average (6-12) and had a team-best three doubles in the Morehead State series.

Redshirt senior Garrett Kueber [12] has made 22 consecutive starts at shortstop and coincidentally has a hit in 20 of those games. He has batted .273 (24-88) since the move, primarily as the Govs No. 2 hitter.

Junior outfielder Malcolm Tipler [14] has reached base in six of his last nine plate appearances. He reached in 4-of-5 against SIU, Tuesday, including a one-out walk in the ninth to start the Govs game-winning rally.

Sophomore first baseman John McDonald [15] saw action in all three games of the Morehead State series. He had two walks in his Game 2 start and notched a base hit in Game 2 of the set.

Junior first baseman Andrew Flaherty [16] has started four of the last five games. He is batting .500 (6-12) with three RBI in that stretch.

UT Martin has won a game in each of the last five series against Austin Peay. The Govs have won the last three sets, last losing a series at UTM in 2015.