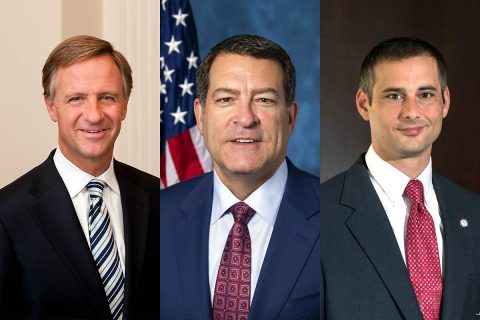 At 10:00am on Friday, May 3rd, Haslam will address undergraduate and graduate students from the APSU College of STEM and the College of Business.

Earlier this year, Haslam completed his second term as governor of Tennessee. During his eight years in office, he transformed the state into a national model for higher education with his Drive to 55 initiative to increase educational attainment in the state to 55 percent by the year 2025.

As part of that program, Haslam established the Tennessee Promise, making Tennessee the first state in the nation to offer high school graduates two years of community or technical college tuition-free. He also instituted the Tennessee Reconnect program, which provided the same assistance to adults wishing to earn a degree or certificate.

In 2016, Haslam unveiled the FOCUS Act, which established regional oversight boards for the six universities that previously reported to the Tennessee Board of Regents. Austin Peay’s Board of Trustees met for the first time on March 30th, 2017.

At 2:00pm on Friday, May 3rd, Green will speak to undergraduate and graduate students from APSU’s College of Behavioral and Health Sciences.

During that ceremony, APSU ROTC students will also be commissioned as officers in the U.S. Army. Green, a graduate of the U.S. Military Academy at West Point, served as an army special operations flight surgeon assigned to the 160th Special Operations Aviation Regiment, where he participated in the mission to capture Saddam Hussein.

After retiring from the military, Green founded the healthcare company AlignMD, which grew to more than $200 million in annual revenue, and the Two Rivers Medical Foundation, which operated two free clinics.

At 10:00am on Saturday, May 4th, Hodges will address undergraduate and graduate students from the Eriksson College of Education and the College of Arts and Letters.

After graduating from Northeast High School in Clarksville, Hodges joined the U.S. Marine Corps. He eventually returned to Clarksville and earned a Bachelor of Science in political science, with a minor in international relations, from Austin Peay State University.

Earlier this year, Hodges began serving as freshman state representative in the Tennessee General Assembly, representing District 67. He serves on the House Education Committee, the House Insurance Committee and as deputy minority whip for the 111th General Assembly. Hodges is operations manager for the Clarksville-Montgomery County School System.

Austin Peay offers a free live webcast of each commencement ceremony. A link to the webcast will be made available within 24 hours of each ceremony. The ceremonies also will be broadcast live on Magic 91.9 WAPX-FM, a broadcast service of the APSU Department of Communication.