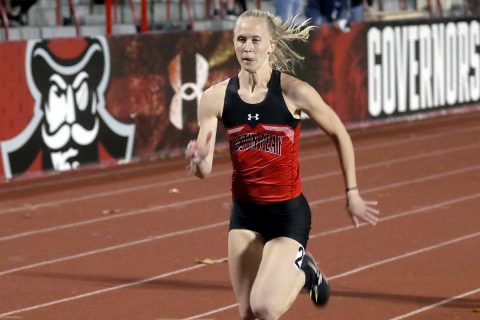 The Governors portion of the weekend didn’t truly get underway until 5:00pm (CT), Friday, with a limited selection of running events seeing Austin Peay competitors slated to go in the 100m hurdles, 100m dash and 5000m run, while the 6:00pm long jump will be Austin Peay’s lone Friday foray into the field.

Saturday dawns at 10:00am (CT) with the high jump and pole vault, with running events slated for a noon start.

Junior Maya Perry-Grimes [1] is going to be busy over the weekend. Friday, she’ll take part in the second flight of the long jump alongside freshman Jessica Kelley [2] and she’ll be one of six Govs overall and three in heat five to run the 100m dash. That’s the tough day; she’ll return for the triple jump on Saturday could factor into the relays after running the 4x100m last month at the Florida Relays.

One of Perry-Grimes’ counterparts in the 100m will be Tymeitha Tolbert [3], who finished 12th overall in the event in Atlanta last season and was sixth among collegiate runners. Another 100m runner, freshman Kyra Wilder [4], enters the weekend on the heels of wins in the 100m and 200m at last week’s home event and looks to recapture that success this weekend.

Senior Nia Gibbs-Francis [5] will be in the high jump, as she usually is and especially after a spring that has seen her reach new heights. She’ll also compete in the 400m hurdles, a discipline she’s just recently taken up with consistency but has yielded good results for her and rewarded head coach Doug Molnar [6]‘s faith in her abilities.

Junior Amelia Thiesing [7] and Atlanta native Sabrina Richman [8] will line up in the fastest heat of the 400m dash, taking their place in the blocks alongside two members of the region’s top-100 in Brown’s May Stern and Western Kentucy’s Juannae Lewis. Richman set personal-bests in the 400m and 200m in her hometown last season.

In the 100m hurdles, sophomore Lennex Walker [9] will line up alongside five other athletes in the region’s top-200 competitors in the event. Walker herself ranks 101st, one-thousandth of a second from the top-100 and less than four-tenths from the top-50.

Live results for this event will be provided courtesy of Delta Timing and a complete recap of each day’s action will be available at www.LetsGoPeay.com [10]