Muscle Shoals, AL – Two players in the top-10 is a recipe for success, and the Austin Peay State University (APSU) men’s golf team put forth an excellent opening-round showing at the 2019 Ohio Valley Conference Men’s Golf Championship, which opened Sunday on the Fighting Joe at the Robert Trent Jones Golf Trail at the Shoals. 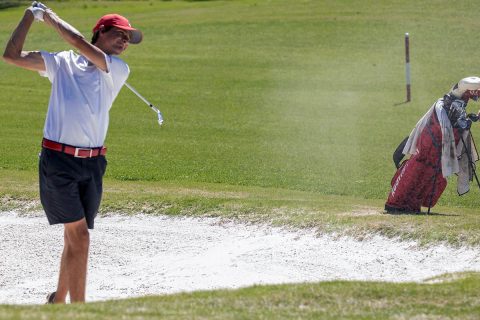 The Govs sit firmly in third thanks to an opening-round 283, their best round of the spring and one off the season-low set in the very first round of 2018-19 at the Golfweek Program Challenge back in September.

It’s Austin Peay’s best round in OVC play since a second-round 284 at the 2015 OVC Championships.

Belmont’s 275 gave the Bruins the overall lead. Defending champion Jacksonville State is two shots behind the Bruins at 277, with the Govs eight shots back overall. Murray State (285) and Eastern Kentucky (286) round out the top-five after Day One, with SIU Edwardsville (287) lurking just outside the top-five.

Two Govs are well-positioned to make a run for All-Tournament honors if they can sustain their Day One pace. Sophomore Chase Korte [1] posted a 69 in the opening round, tying him for eighth, while junior Michael Busse [2] is right there with Korte at 70. Korte closed the front nine on fire, with birdies on four of the front’s final five holes including the difficult par-3 at No. 9 that’s all water until a postage-stamp sized green, while Busse did his damage with a bogey-free, three-birdie back nine.

Lurking near the top-10 and a prime moving day candidate for the Govs is junior Austin Lancaster [3]; his one-under 71 has him tied for 12th but within easy striking distance of the top of the leaderboard. Similar to Busse, Lancaster had a bogey-free back-nine and supplemented that showing with birdies on  both back-nine par-5s—the 537-yarder on No. 17 and the mammoth 581-yarder at No. 12, the course’s longest hole. He leads the Govs and ranks second among all players with 15 pars after round one.

Staying true to his nature, sophomore Garrett Whitfield [4] stayed at an even keel for most of the first round, with a bogey at No. 17 putting him over par for the day with a 73. He birdied hole Nos. 6, 8 and 12 in a mid-round push up the leaderboard, with the birdie on No. 6 one of just six to drop at that hole on Sunday.

Freshman Micah Knisley [5] will look to bounce back Monday after a tough opening-round 83. This isn’t the first time Knisley has had his back against the wall, however; he’s bettered his second-round score by at least four strokes on four occasions this season, including a 14-stroke improvement from Round One to Round Two at the Ryman Hospitality Intercollegiate two weeks ago in Nashville.

“I’m pleased with the day,” said Austin Peay head coach Robbie Wilson [7]. “I love how Chase came out; all week, he’s had a great mindset and he came out firing away. Mike, Austin and Garrett helped keep us in it. Even though Micah had some struggles, that’s part of having a team; we know he’ll bounce back tomorrow. Garrett, Austin and Mike kept us in the tournament.

“It’s natural to want to play with the leaders. We want to be in that position, but it’s a long tournament and we can’t go out and win the tournament tomorrow. We have to put ourselves in good position for the final round.”

Round Two for the Govs will begin 10:30am, Tuesday; Austin Peay has earned the privilege (and the extra rest) of teeing off in the final group alongside Belmont and Jacksonville State.