Clarksville, TN – Golf is a sport where what could happen and what did happen often do not resemble one another in the slightest. The Austin Peay State University (APSU) men’s golf could have gotten out to the kind of start it enjoyed Monday on the final day of the 2019 Ohio Valley Conference Men’s Golf Championships and really put pressure on eventual champion Jacksonville State.

The course was playing with relative forgiveness and birdie putts were there for the taking.

But unlike Monday, those early-round birdie attempts were coming up just short, rolling a little long or breaking right at the hole. It’s golf—sometimes bad luck is the only luck you can get.

So it went for the Govs on Tuesday. You might find this bleak, but there were silver linings all over for Austin Peay despite dropping a spot on the leaderboard. There was a sterling final-round performance from Chase Korte, who became the first Gov since Chris Baker to earn all-tournament honors. 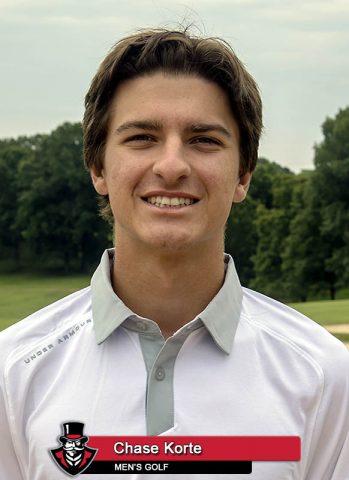 “We just got out to a slow start today and couldn’t get any momentum going early,” said Austin Peay head coach Robbie Wilson. “The thought was if we had a good start, we could scare some teams and it just didn’t happen. Some putts dropped yesterday early that didn’t drop today. We needed that fourth or fifth really good score to provide some extra early firepower and it just never materialized.”

Korte’s final-round 69 left him at 211 (69-73-69), going five-under for the tournament. Fair or not, Chase will always likely be measured by his older brother Dustin—who was on hand to support his younger brother in Tuesday’s final round—and his accomplishments. While Dustin was a two-time all-tournament honoree, he never did so as a sophomore—score one for little brother on that front, on his 21st birthday no less.

After bogeying two of the first three holes, Korte found himself in a bind, on the fringes of the top-10. He shot five-under on the tournament’s final 15 holes, including a birdie on the par-5 No. 17, with an approach shot that took him within inches of an eagle on the hole.

“Chase had another great tournament,” Wilson said. “He didn’t have his best stuff yesterday but he’s as solid as they come and we knew he would bounce back today.”

Juniors Michael Busse and Austin Lancaster tied for 10th, posting matching 214s over the course of three rounds. Busse (70-71-73) spent the week around the top-10, and he shot even-par on the back-nine Tuesday to keep himself there. Lancaster (71-68-75) didn’t have the birdie magic working like he did in Round Two, but acquitted himself on par-3 holes (3.00 strokes per hole) and kept himself in the hunt through the back nine at one-over through the first 13 holes.

Regardless of the outcome—and again, it should be noted that Austin Peay has not finished in the top-five of this tournament since Lancaster and Busse, the elder statesmen in this lineup, were high school juniors—the future is incredibly bright for the Govs and Wilson, who returns everyone plus brings in a solid recruiting class.

“We had a really good year,” Wilson said. “Putting three players in the top-10 at the conference championship is a great feat and I’m proud of those guys. We’ll have basically the same group back (next year), plus some freshmen. Competition is going to be extremely high, and expectations will be high as well.”