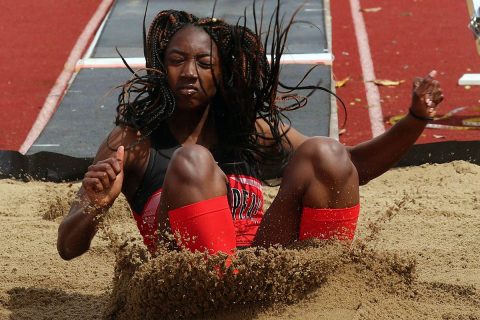 This meet brings several programs large and small together as the regular season nears its end and conference championships begin to ramp up.

Austin Peay will see five teams this week who the Govs will battle in mid-May for the Ohio Valley Conference title in Murray State, Southeast Missouri, SIU Edwardsville, Tennessee State and UT Martin, to say nothing of high-level competition such as the host Tigers, Arkansas State and Lipscomb.

The event gets underway with a trio of track and a trio of field events on Friday; in the 2 o’clock hour, only the long jump will feature Governor student-athletes, including Lennex Walker [1] and Maya Perry-Grimes [2]. The track events begin at 5:00pm, with Austin Peay student-athletes scheduled for the 200m and 1500m events. Four Govs are scheduled to run in the 71-person 200m field, with Kyra Wilder [3], Tiyanna Johnson [4] and Amelia Thiesing [5] among the top nine seeds.

Saturday’s schedule dawns at 10 a.m., with the high jump among the first events scheduled to go off. Senior Nia Gibbs-Francis [6] is seeded fourth in the event and has displayed some of the finest form in her career over the last few weeks. Also scheduled for a 10:00am start is the women’s pole vault, where sophomore Morgan Bradley [7] is seeded second overall.

In fact, despite the depth and quality of the field scheduled to compete in Memphis, a number of Govs are the top seeds in their respective events, which speaks to the excellence of the Austin Peay roster. Tymeitha Tolbert [8] and Garielle Netter [9] are two of the top five seeds in the 45-runner 100m dash, while sophomore Sabrina Richman [10] is the third overall seed and second among collegiate runners in the 400m dash.

Sophomore Lennex Walker [1] will face an excellent test in the 100m hurdles. She’s seeded second in the event, and will square off against Emma Nowfor of Arkansas State, herself a top-35 in the NCAA West Region. In the 3000m steeplechase, Caroline Kiplagat [11] is seeded second to another Arkansas State runner, Sammy Brainard, and will be the only senior running in the nine-woman field.

The top five seeded quartets in the meet-closing 4x400m relays are separated by less than a second-and-a-half, with Austin Peay’s Richman, Thiesing, Kyra Wilder [3] and Allana Johnson [12] among the prohibitive favorites. Wilder, one of the OVC’s top freshmen, is also a darkhorse pick in the 100m event as she’s on the precipice of breaking 12 seconds in the event for the first time in her career.

Live results for this event will be provided courtesy of CFPITiming.com and a complete recap of each day’s action will be available at LetsGoPeay.com.