Clarksville, TN – There will be two Austin Peay State University (APSU) men’s golf alumni participating in the Nashville Golf Open, a fourth-year stop on the Web.com Tour scheduled to begin Thursday at Nashville Golf and Athletic Club thanks to a Monday qualifying win at Greystone Golf Club in Dickson Tennessee. 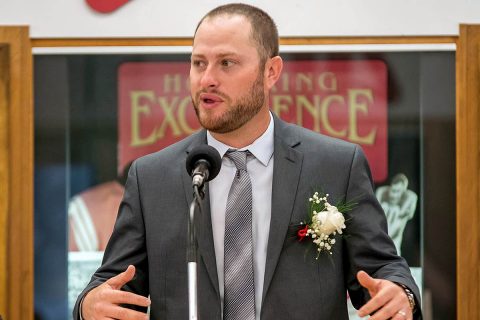 Erik Barnes, a tour veteran who placed sixth at last month’s Chitimacha Louisiana Open and was a top-50 performer on the tour’s money list last year, is once again in the field—he’s been in the field all three years this event has been held, making the weekend last year.

Barnes is scheduled to tee off at 12:06pm (CT) on Hole No. 1, alongside Eric Axley and Daniel Summerhays, the former a two-time winner on the www.Web.com [1] Tour and the latter a longtime pro who has nearly $9 million in career earnings on the PGA Tour.

Leaver will get a late start off Hole No. 10, teeing off at 1:56pm (CT). He’s paired with MJ Daffue and Taylor Eyster, who both qualified behind Leaver at Greystone, Monday.