Athens, GA – The Austin Peay State University (APSU) women’s tennis team’s thrilling season came to an end, Saturday, May 4th at the Magill Tennis Center on the campus of the University of Georgia, as the Governors fell to No. 22 Wake Forest, 4-0, in the first round of the NCAA Tournament. 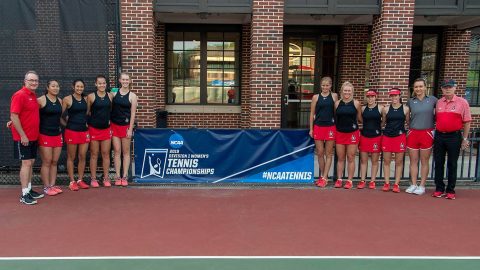 Austin Peay Women’s Tennis has undefeated season come to an end at the 2019 NCAA Tournament with loss to #22 Wake Forest. (APSU Sports Information)

But the score doesn’t indicate how competitive the matches were, nor does it diminish the accomplishments the team achieved this season.

The Govs entered the regional with an unblemished 22-0 record, trophies as the Ohio Valley Conference’s regular season and tournament champions, the OVC Coach of the Year, Ross Brown [1], and five All-OVC selections.

They came up against a Wake Forest program playing in the ‘Big Dance’ for the fourth consecutive season and had played 33 prior NCAA Tournament matches.

Despite the rankings and recent Tournament success Wake Forest entered with, the Govs did not flinch or come out intimidated: they battled right from the get-go.

The Deacons secured the first point of the match after winning doubles matches at the No. 1 and 2 courts, though Danielle Morris [2] and Fabienne Schmidt [3] led their match on the third court, 4-3, jumping out to the lead in the first game.

Morris also had an impressive showing in singles play on Court Six, securing the Govs’ first set victory, 6-3, and was locked in a tight second set, 6-6, and leading the tiebreaker 1-0 when the Deacons took the decisive fourth point.

Lidia Yanes Garcia [4] at No. 2 singles also came out strong, edging out a nail-biter first set victory, 7-6 (7-4), and was tied 2-2 in the second set at the conclusion of the dual. Not long after Yanes Garcia won her set, Schmidt at No. 4 came up just short in a wild back-and-forth affair in the first set, falling in extras, 6-7, (6-8), to the Deacon’s Saby Nihalani.

Wake Forest secured its second point of the dual when Chandler Carter defeated Helena Kuppig [5], 6-1, 6-2 at No. 5, and then picked up its third point after Eliza Omirou defeated Tatiana Lopez [6], 6-2, 6-1.

The dual came down to No. 1 singles, where Claudia Yanes Garcia [8] battled back from a 1-6 first set defeat to have a couple opportunities to force a third set. Davis, though, showed why she came in ranked 35th nationally, rebounding to take the next three games and ultimately a 7-5 second-set victory, allowing the Deacons to advance to the second round of the tournament.

The Governors looked like they might pick up the program’s first point in NCAA Tournament play, but it unfortunately did not pan out. However, Brown was happy with the grit and determination the team competed with all morning.

“The end score was 4-0, but we were in a number of matches there that were very, very close,” Brown said. “We won a couple first sets in a couple matches, and were up in the second set in a critical match, but just let it slip away. These women, I just couldn’t be more proud of them, where they’ve come from and what they’ve done.”

The matchup with Wake Forest marked the final matches for seniors Claudia and Lidia Yanes Garcia [4], two of the most decorated athletes in Austin Peay State University history, and not just in tennis. Their talents and presence – as well as that of fellow senior Kuppig – will be hard to replace, but Brown is encouraged the younger players had the opportunity to play on the biggest stage in collegiate tennis.

“I give credit to our seniors, but what’s encouraging is how well we competed with Fabi (Schmidt) and Danielle,” Brown said. “They’re going to be the core of this team down the road; that’s who were going to build this team around coming back. That performance was great, and it was good to get Honoka (Nakanishi) playing No. 1 doubles some experience like this.

“It’s hard to take when you realize you are in a close fight and you don’t get there, but it’s going to lay the foundation for future success down the road.”

With the outcome still fresh, it might be difficult to appreciate just what a special season this was for the Govs, but Brown is confident, in the future, he and the team will look back on this year and remember it fondly.

“I’m thankful for (assistant coach) Maria (Sorbello), I’m thankful for the staff that we have here at Austin Peay that put us in a position to be competitive,” Brown said. “It’s a fun thing when you can play a small role in these young ladies’ lives and give them memories they’re going to have for the rest of their lives.”