APSU Baseball has 34 hits in rout of Eastern Illinois, 29-4 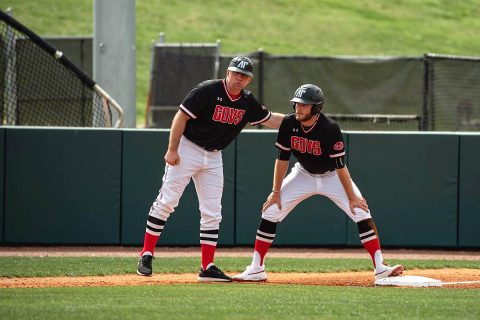 Sixteen different Governors recorded a hit in the contest, 11 of those posting multi-hit outings.

Included in the day’s hit tally were six home runs – two shy of tying the program record. In fact, it was a grand slam by left fielder Aaron Campbell [1] that opened the scoring in the first inning. Right fielder Parker Phillips [2] added a three-run homer in the third to help extend the lead to 14-0.

Two innings later catcher David Martinez [3] joined the home run parade with a solo shot. His brother, Sebastian, made his first collegiate hit a memorable one with a three-run home run in the eighth inning. The duo became the first brothers known to post home runs in the same game in program history.

Austin Peay starting pitcher Jacques Pucheu [7] (7-3) backed up the offensive outburst with five scoreless innings of work for his seventh win. He struck out five batters while scattering two hits and two walks before seeing his day end early for extra rest before next week’s outing.

Eastern Illinois (24-26, 13-16) would break up the shutout bid against the Governors bullpen in the sixth when an error assisted in a run-scoring single. The Panthers would tack on four runs in the ninth, designated hitter Jimmy Huber hitting a solo home run to right field, but it was too little too late.

Campbell, who left Game 1 of the series early due to injury, returned with an impressive 4-for-6 outing that included Govs season-high tying seven RBI. Phillips went 3-for-4 with four RBI and scored four times. First baseman John McDonald [8] went 4-for-6 with an RBI.

Huber came off the bench to lead Eastern Illinois’ nine-hit outing with a 2-for-2 performance.

The Govs got their first rally started with shortstop Garrett Kueber’s [10] one-out double. The Panthers intentionally walked right fielder Parker Phillips [2] and then center fielder Garrett Spain [11] was hit by the first pitch of his plate appearance, loading the bases. Right fielder Aaron Campbell [1] made sure they didn’t stay loaded for long, hammering the first pitch he saw for a grand slam that set the tone for the game’s remainder.

Brotherly Bombs
David Martinez [3] and infielder Sebastian Martinez [4] showed power runs in the family during the Govs rout. David hit his sixth home run of 2019 with a solo homer to left center in the fifth inning. Three innings later, Sebastian showed off his swing with a three-run home run to right center in the eighth. They became the first known brotherly duo to hit a home run in the same game in Governors history.

Numbers Game
16 of the 17 Governors who had a turn at the plate recorded base hits. Eleven of those batters posted a multi-hit outing, and 11 had an extra-base hit. Tyler Thompson [12] and Ryan Kouba [13], who are primarily pitchers, each recorded their first base hits as Governors. Austin Peay also set a record for most total bases in a game, finishing with 61 total bases – a 1.052 team slugging percentage.

Ten To The Plate X 4
Austin Peay sent 10 men to the plate in the first, third, fifth and eighth innings in Saturday’s win. Those four frames accounted for 23 of the Govs 29 runs in the contest. All told, the Govs sent 64 men to the plate.

Austin Peay and Jacksonville State again will finish the day tied atop the OVC standings. For the second straight day, the Govs romped at Eastern Illinois, and for the second straight day, Jacksonville State defeated SIU Edwardsville with a walk-off home run. That leaves the Govs and Gamecocks tied at 18-8 with four games each left while Belmont slipped to 1.5 games back