Charleston, IL –  Austin Peay State University (APSU) baseball catcher David Martinez’ [1] three-run home run in the third inning gave the Governors a lead it would not relinquish on the way to a 6-3 Ohio Valley Conference victory against Eastern Illinois, Sunday, May 12th at Coaches Stadium. 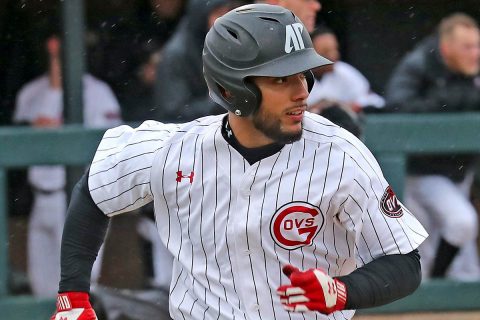 Austin Peay (29-20, 19-8 OVC) swept the three-game OVC series against Eastern Illinois to remain tied atop the league standings with Jacksonville State, which swept its three-game series against SIU Edwardsville.

That tie will be broken in a winner-take-all three-game series when the Governors host the Gamecocks, Thursday-Saturday, on Joe Maynard Field at Raymond C. Hand Park.

Eastern Illinois (24-27, 13-17 OVC) grabbed its first lead in the series – and ultimately its only lead of the series – when it loaded the bases in the first inning on a pair of walks and a single. Catcher Ryan Knernshield beat out a potential inning-ending double play, which allowed a run to score for a 1-0 lead.

The Governors mounted their response two innings later. Left fielder Aaron Campbell [2] tied the game with a double to drive in third baseman Gino Avros [3]. Martinez followed and hit a fly ball that found its way over the wall in right center for a three-run home run and a 4-1 lead. Second baseman Malcolm Tipler [4] would add another run with a single that drove in designated hitter Matt Joslin [5] for a 5-1 lead.

Austin Peay starter Ryan Kouba [6] (4-0) would take advantage of the run support to post a five-inning outing that saw him allow two runs on four hits. The Governors bullpen took over and would allow one run on two hits over the final four innings. Greg Leban [7] would strike out five of the six batters he faced in the seventh and eighth innings before closer Brett Newberg [8] notched his seventh save with a hitless ninth.

Joslin would lead Austin Peay’s offense with a 3-for-5 outing, scoring once. Shortstop Garrett Kueber [9] also had two hits and six other Govs hitters posted a base hit each.

After rolling through the series’ first two games, Austin Peay faced its first deficit of the weekend, 1-0, going into the third inning. The Govs offense got rolling against the Eastern Illinois starter when third baseman Gino Avros [3] led off the inning with a single.

Right fielder Parker Phillips [11] was hit by a pitch and left fielder Aaron Campbell [2] hit a double to tie the game. Catcher David Martinez [1] got ahead in the count, 3-1, and took the next pitch over the wall in right center to give Austin Peay an insurmountable 5-1 lead.

Nearly A Record
With its six runs in Sunday’s series finale, Austin Peay State University scored 48 runs in the three-game OVC series against Eastern Illinois. That total fell one run shy of tying the program record for runs scored in a three-game league series. The 2003 Governors scored 49 runs at Eastern Kentucky and the 2004 Governors scored 49 against UT Martin.

What A Weekend
APSU finished the weekend series with a.426 team batting average against Eastern Illinois with 14 doubles and eight home runs – a .721 slugging percentage. The Govs also earned 22 walks against 23 strikeouts – a .513 on-base percentage.

APSU Baseball opens its four-game homestand, which includes the OVC set with Jacksonville State, with a 6:00pm, Tuesday contest against Western Kentucky. Tickets for each game of the upcoming homestand may be purchased online by visiting LetsGoPeay.com/buytickets.