Cape Girardeau, MO – The Austin Peay State University (APSU) track and field earned a top-three finish at the Ohio Valley Conference Outdoor Championships for the first time since 2015, placing third in the 2019 event thanks to some outstanding final-day performances. 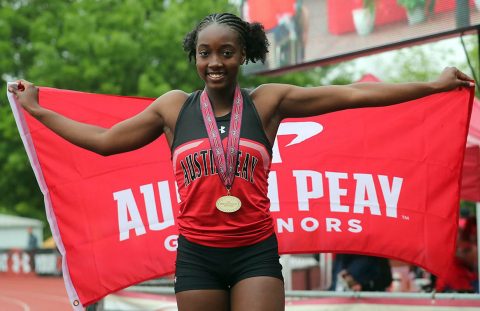 Austin Peay Track and Field sophomore Lennex Walker won Gold in the 100m hurdles with a time of 13.89 at the 2019 OVC Outdoor Championships. (APSU Sports Information)

The Govs tallied 116 points as a team, most since the 2015 event held at Fortera Stadium—so long ago now that it was called something else when the APSU Govs hosted that year.

“A couple of weeks ago I started looking at the lists and started to think these guys could be a top-three team,” said head coach Doug Molnar [1]. “But they came out and executed better even than what I could’ve imagined.”

Longtime followers of the APSUy track and field program may remember the saga of Lennex Walker’s [2] 2018 OVC Outdoor Championships. After a hamstring injury left her barely able to walk, she gamely limped through the finals in the 200m dash and 100m hurdles, after entering as a favorite in the latter event.

So winning gold in this season’s 100m hurdles—after conquering the 60m indoor event as well—was a bit of sweet justice for the sophomore. Her 13.89 mark in the event was the best by an OVC student-athlete in 2019, moving her into the region’s top-100, and she’s the first Governor to earn gold in the event since 2002. Freshman Camaryn McClelland [3] picked up three points with a sixth-place, 14.23 mark, second among league freshmen.

Austin Peay secured an additional five points in the 400m hurdles event, marking the first time since 2010 that multiple Govs picked up points in the 100m and 400m hurdles. In her final event as a Gov, senior Nia Gibbs-Francis [4] placed fifth with a 1:04.31 mark, while freshman Mikaela Smith [5] placed eighth overall and second among freshmen at 1:13.54. It’s entirely possible Smith was just clean out of gas by that point; she’d placed fifth with a blistering 2:15.95 mark in the 800m run just 20 minutes before.

Sabrina Richman [6] and Amelia Thiesing [7] proved to be the class of the OVC in the 400m dash. After taking the top two qualifying spots in the prelims, the duo proved that was no fluke, with Richman (55.24) taking gold and Thiesing (personal-best 55.65) silver for a big 18-point boost.

Richman wasn’t done, powering through the 200m dash final at 24.55 to snag silver. She led a trio of Govs across the line, followed closely by Kyra Wilder [9], who earned bronze with a 24.75 mark, and Tiyanna Johnson [10], who placed eighth (25.54); Wilder and Johnson represented two of three freshmen to make the final.

That just begins listing the accomplishments for Wilder, who found another spot on the podium in the 100m dash finals with a third-place, 12.12 run. The Govs took three-through-five in the finals, with Wilder followed by Tymeitha Tolbert [11] (fourth, 12.13) and another big run from Tiyanna Johnson [10] (fifth, 12.27) to total 15 points for the Govs.

“It was a parade to the podium there for a while,” Molnar said. “I can’t possibly say enough about Coach (Valerie) Brown, who did such an excellent job getting the sprint crew ready; our whole staff really did an outstanding job and Val took that group to another level.”

The APSU Govs bookended the day with podium appearances in the 4x100m and 4x400m relays. The Govs began the day with Tolbert, Wilder, Tiyanna Johnson [10] and Diamond Battle [13] taking bronze in the 4x100m at an even 47.00, but closed it out even stronger as Allana Johnson [14], Richman, Thiesing and once more Wilder smoked the competition with a 3:48.65 mark to take gold in the event for the first time since 2016 and fourth time overall.

The 2019 OVC Outdoor Championships may spell an end to the season, but Governor supporters should be emboldened by such a young group accomplishing so much this year, while losing just a handful of names off the roster for next year.

“It’ll be a new group and there will be new challenges next year, but this remains a very young group and our future is incredibly bright,” Molnar said. “Having so many of these talented young ladies back is going to be great for this program.”